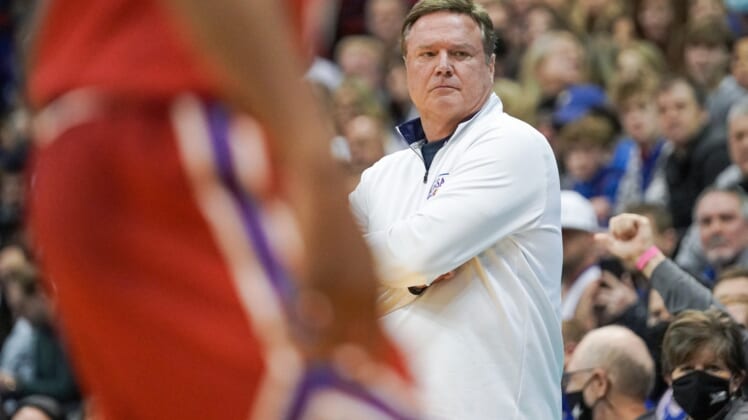 Coleman-Lands, who played previously at Illinois, DePaul and Iowa State, enjoyed his top-scoring performance for the Jayhawks (11-1), going 7 of 9. Lightfoot equaled his career-high, making all seven of his shots.

Lightfoot, subbing for David McCormack, also gave Kansas a sturdy defender inside to hold the Patriots’ top scorer, Josh Oduro, to 12 points, five below his average.

Davonte Gaines posted a double-double with 15 points and 12 rebounds to pace the Patriots (7-6), who played their first game in 11 days and had a three-game winning streak snapped.

The Jayhawks won their seventh in a row despite off nights from Ochai Agbaji and Christian Braun, who each were 20-point scorers throughout December. Agbaji scored 11 points and Braun added 14, while going 7 of 26 collectively.

Each hit big buckets inside the final TV timeout, though. Braun canned a 3-pointer with 3:11 left to give Kansas a 69-61 lead. Agbaji converted a three-point play with 1:46 remaining, his first bucket of the second half, to make it 72-61. Braun also made four late free throws.

Kansas closed the first half with five consecutive makes as part of a 12-5 flurry to go into the break with its largest lead through the first 20 minutes, 48-37.

Coleman-Lands led the Jayhawks with 11 points, going 4-for-5, including three treys, in 13 minutes to help Kansas forge a 23-0 advantage in first-half bench points.

Oduro scored the first five points for George Mason before going to the bench with his second foul before three minutes had elapsed. He re-entered after the final TV timeout and finished with seven first-half points. Gaines netted 12 to lead the Patriots at halftime.

George Mason kept the game close as the teams used five-guard lineups much of the half. Each club had six 3-pointers, though the Jayhawks gained separation behind threes from Agbaji and Coleman-Lands during the finishing stretch.