Avs No. 1 goalie Darcy Kuemper ready for second round 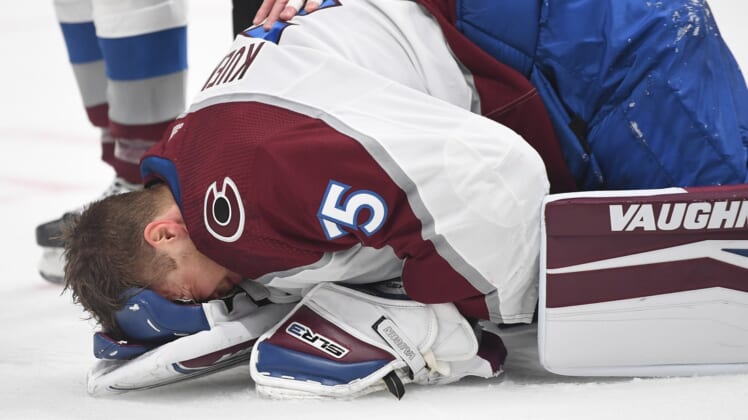 When the Colorado Avalanche open the second round of the Stanley Cup Playoffs, top goaltender Darcy Kuemper plans to be in net.

Colorado awaits the winner of the St. Louis Blues-Minnesota Wild series after sweeping the Nashville Predators in the first round.

Avalanche coach Jared Bednar confirmed Kuemper would be good for the first game of the second-round series after sitting out the Game 4 closeout of Nashville with an eye injury.

Kuemper won the first two games of the series, but he took a hit to the eye from the stick of Predators center Ryan Johansen in Game 3. Johansen’s stick went through Kuemper’s mask.

“His spirits are good. He looks good,” Avalanche captain Gabriel Landeskog said. “I’m not going to give you the full report, but his eye is at least a little bit open. So that’s good, and he’s got some nice coloring on there. I think we all told him that same night, ‘Just kind of count your blessings. That could have been bad.'”

St. Louis hosts Game 6 of the best-of-seven series with Minnesota on Thursday night. The Blues grabbed a 3-2 lead at Minnesota on Tuesday.