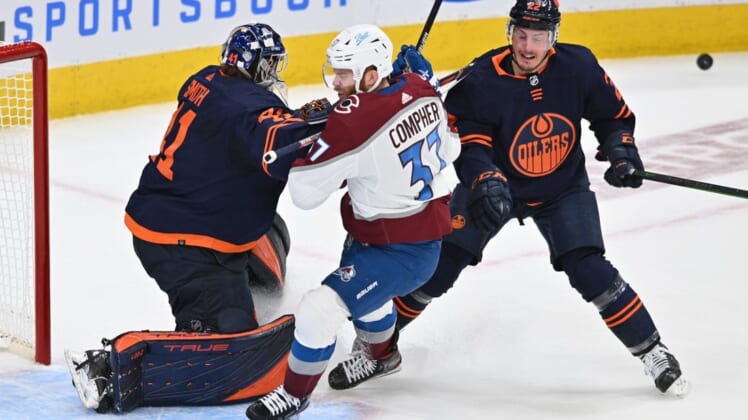 J.T. Compher netted the game-winning goal with less than eight minutes left to give the visiting Colorado Avalanche a 4-2 victory on Saturday and put them one win away from advancing to the Stanley Cup Final.

Valeri Nichushkin scored twice, Mikko Rantanen tallied once and goaltender Pavel Francouz made 27 saves for the Avalanche, who have a 3-0 lead in the best-of-seven Western Conference finals. Devon Toews collected a pair of assists.

The Avalanche, who have posted six consecutive road wins, will look to complete the sweep Monday in Edmonton.

Connor McDavid and Ryan McLeod replied for the Oilers. Mike Smith turned in a 39-save performance but faltered on the winning goal.

With the score tied 2-2, Compher was sprung on a partial breakaway immediately after departing the penalty box, and he slipped a shot through Smith’s legs with 7:18 remaining in regulation.

The Oilers needed an early boost and received it when McDavid opened the scoring 38 seconds into the clash. McDavid gained the puck as he raced toward the net, and the captain converted his ninth goal — and 30th point — of the playoffs.

Nichushkin evened the score at 16:12 with a lucky marker. His pass toward the slot ricocheted off the stick of Oilers defenseman Darnell Nurse and into the cage. He then netted his fifth playoff goal to put the visitors ahead 2-1 at 4:37 of the second period.

McLeod evened the score when his long wrist shot somehow eluded Francouz’s glove at 7:34 of the third period, marking his third playoff goal, before the Avalanche responded.

The victory came at a cost, though, with forward Nazem Kadri injured after being hit from behind by Evander Kane early in clash. Kadri, who has collected six goals and 14 points in the playoffs, left and did not return. Kane was handed a five-minute major.