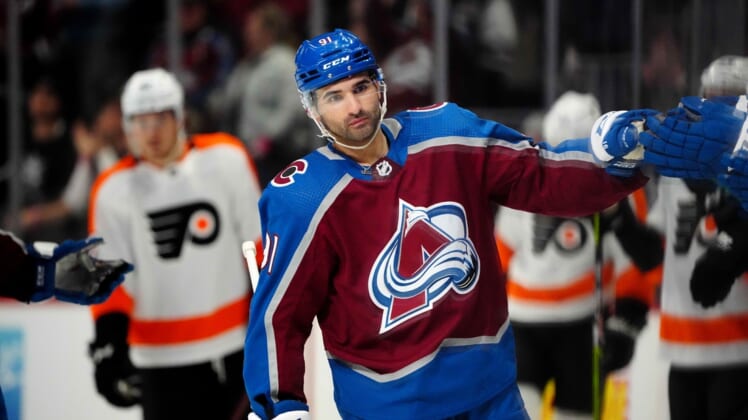 Cale Makar had two goals, Nazem Kadri had a goal and two assists, and the Colorado Avalanche beat the Philadelphia Flyers 6-3 in Denver on Friday night.

Kadri got the Avalanche going early in the first period when he got the puck in the defensive zone, skated into Philadelphia’s end and beat Hart with a screened shot at 7:20. It was his 25th of the season.

The Flyers got even later in the first period when van Riemsdyk put a shot on Francouz, got his own rebound and buried it at 13:02. It was his 16th of the season.

Colorado struck right back just five seconds into a power play. Kadri won the faceoff back to Makar, who stickhandled to the center of the zone and beat Hart with a wrister at 13:46.

The Avalanche went ahead 3-1 just 2:21 later. Kadri’s shot went behind the net, and Compher corralled it, maneuvered to the side and put a shot off Hart’s helmet and in at 16:17. It was Compher’s 13th of the season.

Rantanen finished the first-period barrage with his 32nd goal when his pass attempt to Valeri Nichushkin hit off the stick of Philadelphia defenseman Keith Yandle and through Hart’s pad at 18:06.

MacDermid made it 5-1 when he scored on a one-timer off of a faceoff at 12:19 of the second period. It was his second goal of the season.

MacEwen got one back for the Flyers before the end of the second when he broke in alone on Francouz, fought off Makar and slid the puck inside the right post at 19:28 for his second goal of the season.