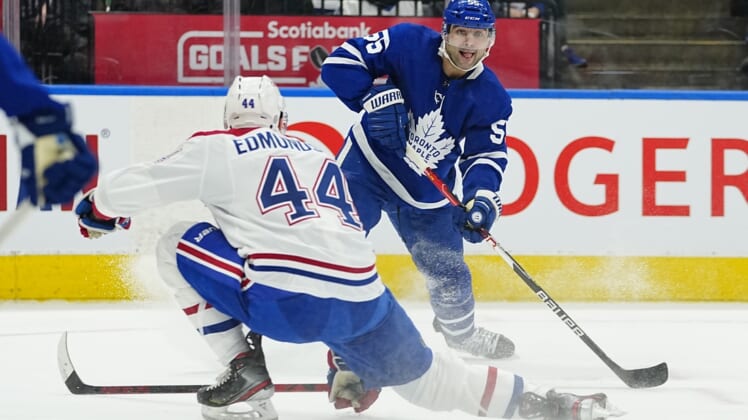 Auston Matthews scored twice for the Toronto Maple Leafs in a 3-2 win against the visiting Montreal Canadiens on Saturday.

Joel Edmundson and Cole Caufield scored for the Canadiens (20-41-11, 51 points). Jake Allen saved 14 of 15 shots before leaving the game in the first period with a lower-body injury sustained on Matthews’ first goal. Sam Montembeault made 23 saves in relief.

Matthews gave Toronto a 1-0 lead at 13:32 of the first period. Allen stopped Mark Giordano’s shot, but the rebound went to Matthews for his 50th goal in his past 50 games. He’s the first player to score at least 50 goals in a 50-game span at any point of a season since Mario Lemieux in 1995-96.

Matthews made it 2-0 just 27 seconds later, driving up the middle before skating to the left circle at 13:59.

Edmundson cut it to 2-1 at 5:58 of the second period. Nick Suzuki circled the back of the net before finding a pinching Edmundson at the bottom of the right circle.

Tavares put the Maple Leafs ahead 3-1 at 8:07 of the second. After taking a feed from Ilya Mikheyev, Tavares spun around in the right circle and banked the puck in off the skate of Canadiens defenseman Jordan Harris.

Caufield extended his goal streak to four games to bring Montreal to within one at 18:03 of the period.

It developed when Brendan Gallagher’s centering pass attempt hit Leafs defenseman Jake Muzzin and bounced to Caufield in the right circle to narrow it to 3-2 seconds after a Canadiens power play expired. The winger has scored 17 of his 18 goals on the season in 27 games under interim coach Martin St. Louis.