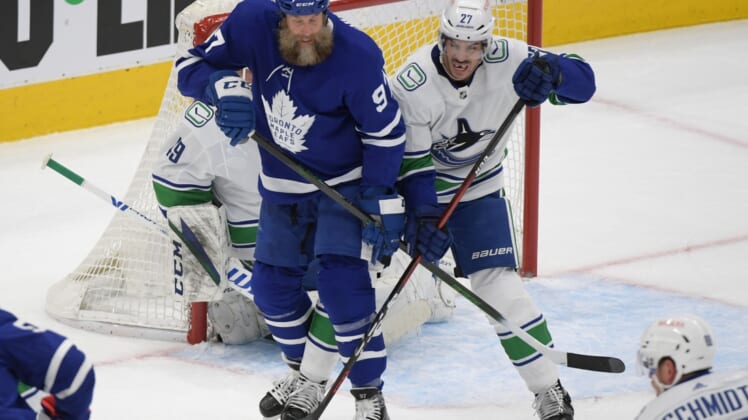 Auston Matthews scored his league-leading 36th goal of the season and the Toronto Maple Leafs defeated the visiting Vancouver Canucks 4-1 on Thursday night.

William Nylander, Pierre Engvall and Mitchell Marner (empty net) also scored for the Maple Leafs (32-13-5, 69 points) in the opener of a two-game set.

Marner added an assist for the Maple Leafs, who clinched a playoff spot by defeating the Montreal Canadiens 4-1 on Wednesday and have won four games in a row.

Nylander scored his 16th goal of the season at 15:29 of the first period. He took a wrist shot from the bottom of the left circle after receiving a pass from Alex Galchenyuk.

Toronto had a 7-2 advantage in shots on goal in the first period.

Matthews scored from the right circle 51 seconds into the second period. Marner set him up with a pass to earn his 44th assist of the season.

Toronto led 3-0 thanks to Engvall’s fourth goal of the season. He scored from the right circle at 2:57 of the second period. Rasmus Sandin made the pass to set it up.

Miller scored for Vancouver on a power play at 15:36 of the second from a sharp angle in the left circle. His 11th goal of the season came with nine seconds remaining in Timothy Liljegren’s hooking penalty.

Toronto led 18-11 in shots on goal after two periods.

Marner scored his 18th goal of the season into an empty goal at 19:05 of the third period.

Toronto’s Wayne Simmonds and Vancouver’s Alexander Edler were given fighting majors at 1:54 of the first period. Edler had served a two-game suspension for his hit on Zach Hyman on April 18. Hyman has not played since because of a sprained knee.

With a playoff spot clinched, the Maple Leafs did not have Jake Muzzin, Morgan Rielly, Nick Foligno and Jack Campbell in the lineup.