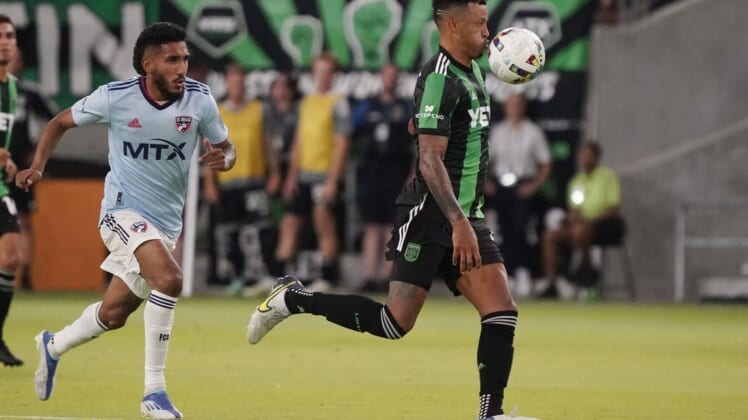 Sebastian Driussi and Danny Hoesen scored goals 12 minutes apart deep in the second half as Austin FC came from behind to produce a 2-2 draw with visiting FC Dallas on Saturday in the latest rendition of the Texas Derby.

Austin (8-4-4, 28 points) looked dead in the water after two early second-half tallies by FC Dallas but rallied to earn a point for the first time against its Lone Star State rival after losing the first three all-time matches between the sides last season. Austin remains two points ahead of FC Dallas in the Western Conference standings.

After pressing the attack in a scoreless first half, Dallas (7-4-5, 26 points) finally found the net in the 58th minute when Paul Arriola ran to the far post to clean up the rebound of a shot by Paxton Pomvkal that was stopped by Austin goalkeeper Brad Stuver.

Dallas added to its lead in the 68th minute. The scoring play started in the midfield when Alan Velasco made a pass that went through the legs of Austin defender Julio Cascante which was gobbled up by Brandon Servania, who roared into the goalmouth alone on Stuver before lifting a shot that found the roof of the net and produced a 2-0 lead.

The visitors’ outburst seemed to shock Austin FC to life.

First, Driussi scored in the 72nd minute when he and teammate Moussa Djitte worked a breakaway situation, with Driussi taking a pass deep in the Dallas zone and dribbling to his right before beating Maarten Paes to the bottom right corner of the net, cutting Austin’s deficit to one goal.

Then Nick Lima sent a perfect crossing pass into the box in the 85th minute onto the diving head of Hoesen, who beat a Dallas defender to the ball and then overwhelmed Paes to score the equalizer.

Dallas had the best scoring chances in the first half, forcing saves from Stuver in the 12th and 21st minutes, on shots by Jesus Ferreira and Arriola, respectively. Facundo Quignon also had a shot on goal in the 32nd minute that was turned away by the Austin keeper.