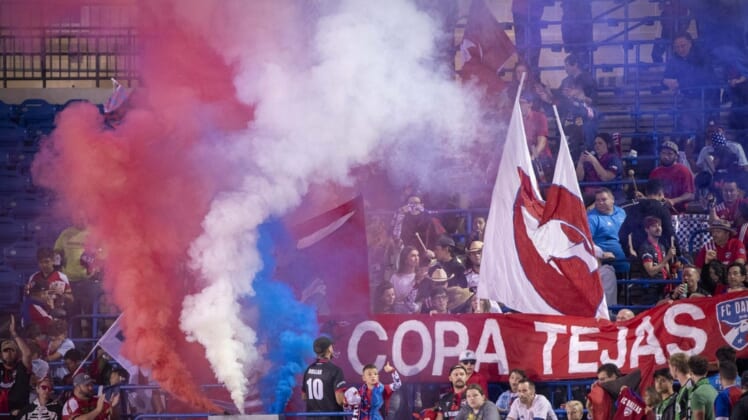 Austin FC will look for its first-ever win over FC Dallas when its hosts its Lone Star State rival in the latest rendition of the Texas Derby on Saturday in a key Western Conference match.

Austin FC is two points above its north Texas neighbors in the West standings after the teams each won their opening Copa Tejas games of the season against Houston. That means Saturday’s winner will take over the top position in the race to claim the fan-created trophy awarded to the Texas club with the most points from intrastate matches.

Austin (8-4-3, 27 points) heads home after a 1-0 win in Montreal last Saturday which was produced despite playing the final 46 minutes and stoppage time a man down.

Dani Pereira was sent off with the match with Montreal scoreless in the 44th minute. But Austin got a 67th-minute goal from Maxi Urruti to propel the visitors to the win and into third place in the conference.

Saturday’s match is Austin’s only MLS home game in a seven-week stretch.

“We’re back home after a good emotional win on the road, but more importantly we’re going against a direct rival and a direct opponent in our conference who’s a very good team,” said Austin coach Josh Wolff said. “We’ve got to put a lot into this. Our next five or six games are important, but this next match is hands down the most important and grabs all of our focus.”

FC Dallas (7-4-4, 25 points) travels south after a 2-0 loss at home to Vancouver on Saturday. Dallas outshot Vancouver 16-4 and out-possessed the visitors 66 to 34 percent but managed only one shot on target.

After losing just once in its first 11 matches (6-1-4), FC Dallas has three defeats in its last four outings.

“I think there are just a lot of things that we can get better at,” Dallas midfielder Paul Arriola said after the setback to Vancouver. “Collectively, it’s a tough loss and one that we’ll be able to learn from and hopefully use this experience going forward.”

FC Dallas won all three meetings with Austin last year in the latter’s inaugural campaign. The three-game sweep marked the first for FC Dallas against a team in a single season since 2016.

Dallas has captured two of its past three road matches, including a 3-1 win in Orlando in its most recent road game in late May. Dallas hasn’t won consecutive MLS road games since May 2018.

Jesus Ferreira scored four goals in the three contests against Austin FC in 2021 and tallied at least once in each match. No FC Dallas player has scored in four consecutive games against a single opponent since 2013-14.