Oct 24, 2021; Miami Gardens, Florida, USA; Atlanta Falcons wide receiver Calvin Ridley (18) gets a tap on the helmet from quarterback Matt Ryan (2) after scoring a touchdown against the Miami Dolphins during the second quarter of the game at Hard Rock Stadium. Mandatory Credit: Sam Navarro-USA TODAY Sports

Atlanta Falcons wide receiver Calvin Ridley is inactive for Sunday’s game against the Carolina Panthers due to a personal matter.

Ridley also didn’t travel to London for the Oct. 10 game due to personal reasons, a 27-20 win against the New York Jets, but returned after the bye week for last week’s 30-28 win over the Miami Dolphins.

Ridley, 26, caught his second touchdown pass of the season in that game. He has 31 catches for 281 yards for the Falcons (3-3) so far this season.

Ridley had career bests of 90 catches and 1,374 yards last season when he supplanted the since-departed Julio Jones as the team’s top wideout. 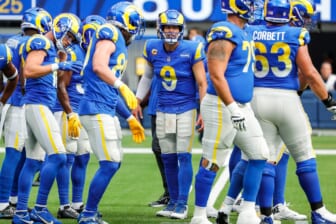