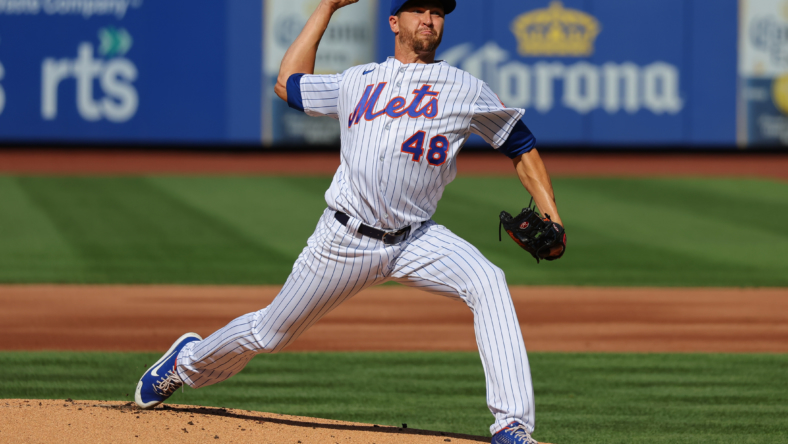 The Atlanta Braves have found themselves linked to New York Mets ace Jacob deGrom for months now. It started with a report during the season that deGrom had interest in switching National League East teams.

From a logicial perspective, this didn’t seem to make a whole lot of sense. The 2021 World Series champs have spent the past calendar year locking up their young stars to team-friendly long-term contracts while taking the risk that a couple of them might not pan out.

It’s this savvy financial philosophy that has Atlanta hopeful it will be able to compete with larger-market teams such as the aforementioned Mets. Signing an injury-plagued veteran seems to run contary to this.

According to a recent report from Ken Rosenthal of The Athletic, it is now highly unlikely that Atlanta will dole out enough cash to sign deGrom or one of the top free-agent shortstops on the open market.

“The Braves are reluctant to enter into a deal with any player who takes up too high a percentage of their payroll, knowing in future seasons the salaries of their young players will rise,” report on Atlanta Braves MLB free agent approach.

deGrom is reportedly looking at roughly $40 million annually on what would be a relatively short-term contract in free agency. That could be too rich for Atlanta’s taste.

As for potential shortstops the Braves might be interested in, Rosenthal’s report suggests that re-signing Dansby Swanson is the likeliest scenario. The likes of Carlos Correa (Minnesota Twins), Trea Turner (Los Angeles Dodgers) and Xander Bogaerts (Boston Red Sox) are all top-flight shortstops available on the market.

As noted above, Braves general manager Alex Anthopoulos has focused his energy in signing multiple young players to long-term extensions over the past year or so. That includes the likes of Austin Riley, Spencer Strider and reigning NL Rookie of the Year Michael Harris, among others.

All of these youngsters are going to see their costs increase as the years go on. Spending $40 million or so on a veteran pitcher when the Braves already boast a top-end rotation never seemed to make much sense.

As it relates to Jacob deGrom, the New York Mets are reportedly joined by the Texas Rangers and Los Angeles Angels in being linked to the two-time Cy Young winner in recent days.