Astros slip by Diamondbacks in the ninth 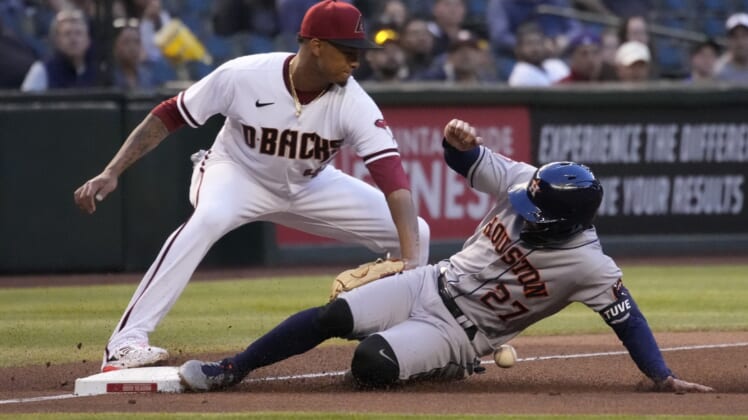 Michael Brantley’s two-out single in the top of the ninth inning drove home Jose Siri with the deciding run and Ryan Pressly worked out of a jam for his third save as the Houston Astros defeated the Arizona Diamondbacks 2-1 on Tuesday in the first game of a two-game interleague series in Phoenix.

The Astros’ ninth-inning surge made a winner out of Hector Neris (1-0), the fifth Houston pitcher. He struck out two in a perfect eighth inning.

Brantley’s hit, his third of the game, came off Mark Melancon after a double by Siri and a walk to Jose Altuve, all with two outs. Melancon (0-1) was the sixth Arizona pitcher.

Pressly allowed a leadoff single to Seth Beer in the bottom of the ninth before Yonny Hernandez bunted pinch runner Jake McCarthy to second. McCarthy went to third on Geraldo Perdomo’s groundout but was stranded when Pressly struck out Carson Kelly swinging to end the game.

Houston has captured four of its first five games. It’s an impressive start to its longest road trip of the season — nine contests in 11 days in Anaheim, Phoenix and, beginning Friday, Seattle.

The Diamondbacks have dropped four of their first five and have scored just 12 runs.

The Astros struck first, taking a 1-0 lead on Siri’s long solo home run to left-center field in the fifth inning.

Arizona tied the game on Christian Walker’s solo homer to left with one out in the sixth, off Astros reliever Bryan Abreu.

Neither starting pitcher figured in the decision.

The Astros’ Luis Garcia, who was second in the American League Rookie of the Year voting last season, threw four innings, allowing two hits while walking two and striking out one.