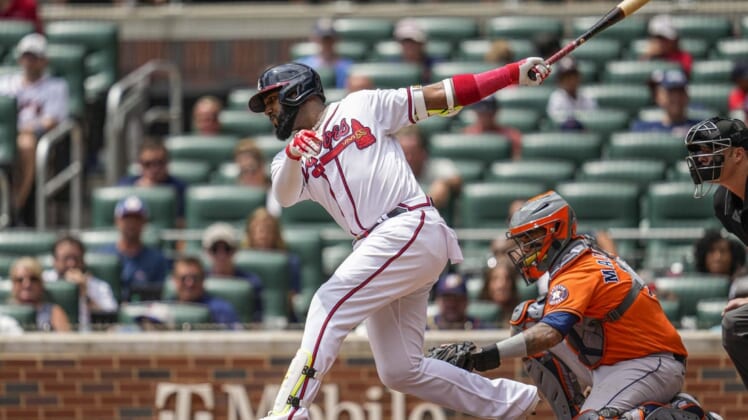 Kyle Tucker’s RBI single drove in the go-ahead run in the eighth inning to help rally the visiting Houston Astros to a 5-4 win over the Atlanta Braves on Sunday and salvage one game of the three-game series between last year’s World Series contestants.

Tucker, who extended his hitting streak to 14 games with a single in the sixth inning, lined a single off reliever Dylan Lee (3-1) to right field to drive in Yordan Alvarez. Tucker took second when Guillermo Heredia bobbled the ball and was charged with an error. Jeremy Pena followed with a sacrifice fly.

Houston starter Jose Urquidy (12-4) went seven innings for the third time in his last four starts. He allowed two runs on five hits, two walks and six strikeouts. Urquidy is 7-1 with a 2.48 ERA over his last 11 starts.

Houston added an important insurance run against reliever Jackson Stephens in the ninth inning on a single by Yuli Gurriel that hit the second base bag and allowed Mauricio Dubon to score.

The Braves, who went down in order in the eighth against Rafael Montero, rallied for two runs in the ninth inning against Ryan Pressley. Matt Olson singled and scored on a triple by Travis d’Arnaud, who came home when Vaughn Grissom grounded out. But Pressley fanned Michael Harris II on three pitches and earned his 25th save.

The Braves took a 2-0 lead when Olson hit a two-run homer, his 26th, in the first inning.

The Astros tied the game with two runs in the third when Alvarez delivered a bases-loaded single. Alvarez was back in the lineup as the designated hitter after leaving Friday’s game early because of shortness of breath.

Atlanta starter Charlie Morton pitched six innings against his former team and allowed two runs on five hits, two walks and 11 strikeouts. It was his fifth double-digit strikeout game of the season and 24th of his career.

Houston’s Jose Altuve did not start because of shoulder soreness.