Astros’ offense aims to get going vs. Blue Jays 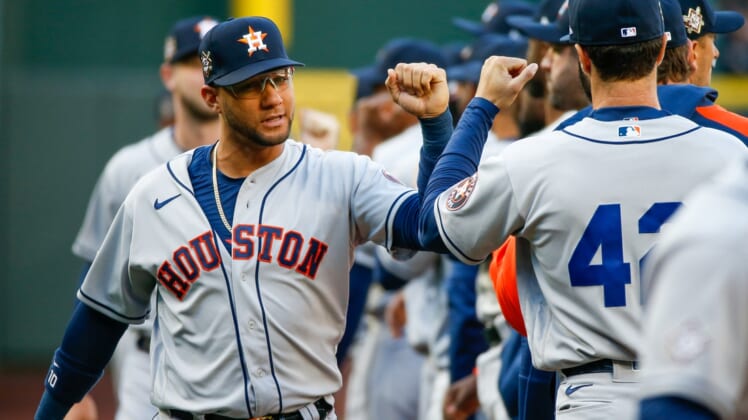 The Houston Astros have been slow out of the gate offensively, concluding their first dozen games with a .199 batting average that is the worst in the American League.

The Astros, set to host the Toronto Blue Jays in a three-game series starting Friday, have hitters struggling up and down their lineup.

First baseman Yuli Gurriel, the 2021 AL batting champion, missed three games on paternity leave during the season-opening, nine-game road trip and is 4-for-30 (.133) since his return.

“His rhythm is off,” Astros manager Dusty Baker said. “He was swinging great coming out of spring training and (Astros hitting coach Alex) Cintron said, ‘Hey man, we need to start the season right now,’ because Yuli was super hot. But it’s hard to maintain that hotness for a long period of time, especially in spring training when the games don’t count.

“It’d be no big deal if it was in the middle of the season because you would have had your timing by then. At the start of the season (it’s different). One thing’s for sure: You don’t win the batting title and forget how to hit. Yuli’s going to hit. I’m not worried about Yuli. We hope that it happens sooner than later.”

Right-hander Justin Verlander (1-1, 0.69 ERA) is the scheduled starter for the Astros on Friday. He worked eight scoreless innings in his latest appearance, a 4-0 victory over the Seattle Mariners on Saturday. He allowed three hits while recording eight strikeouts and walking none in an 87-pitch outing.

According to STATS, Verlander became the first pitcher to log eight shutout innings with eight-plus strikeouts in fewer than 90 pitches on the road since Greg Maddux did so for the Atlanta Braves at Yankee Stadium on July 2, 1997.

Verlander is 4-6 with a 4.28 ERA over 14 career starts against the Blue Jays, whom he no-hit in his previous outing against them, on Sept. 1, 2019. Two of his three career no-hitters have come against Toronto, including one on May 7, 2011, also in Canada.

Right-hander Ross Stripling (0-0, 3.00 ERA) will start for the Blue Jays. He made two starts against the Astros last season, going 1-1 with a 4.15 ERA. He also faced Houston three times during the 2017 World Series while with the Los Angeles Dodgers, working two scoreless innings and allowing two hits and one walk.

Stripling made two relief appearances, both against the Texas Rangers, before making his first start of the season on April 15. He logged four scoreless innings while surrendering two hits and recording three strikeouts in the Blue Jays’ 4-1 victory over the Oakland Athletics.

The Blue Jays improved to 3-0-1 in series this season by taking the rubber match of their three-game road set against the Boston Red Sox 3-2 on Thursday. Toronto right-hander Kevin Gausman carried a shutout into the ninth inning.

“We needed a start like that,” Blue Jays manager Charlie Montoyo said. “There was no room for error, and he gave it to us.”

The Blue Jays, lauded for their lineup full of sluggers, have allowed three or fewer runs in six of their past seven games.