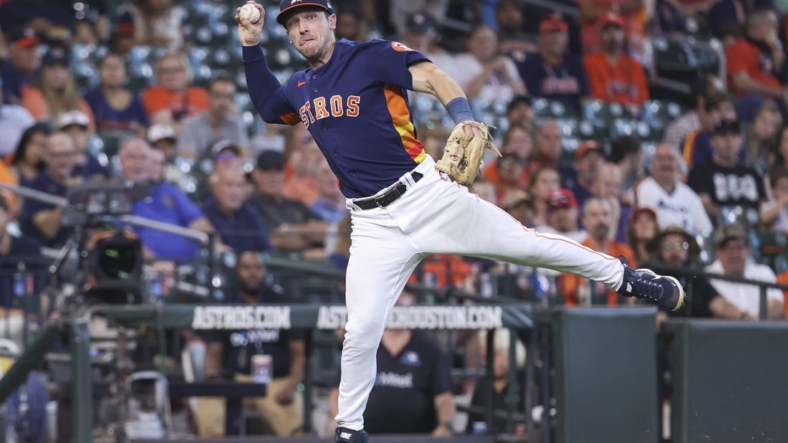 Valdez (16-5) surrendered two runs on four hits and a walk while striking out seven in six innings to lower his season ERA to 2.57.

The Astros (96-51), runaway leaders in the American League West, lowered their magic number to clinch the division to two, with second-place Seattle playing later Sunday against the Los Angeles Angels.

Valdez’s 25th consecutive quality start leaves him one behind the Mets’ Jacob deGrom and the Cardinals’ Bob Gibson, who had 26 split over two seasons.

Alvarez, who homered three times on Friday night and once on Saturday, kept punishing Oakland (53-94) on Sunday. He doubled twice, including a shot high off the wall in left-center that cleared the bases during a five-run third inning.

Alvarez went 9-for-17 with the four homers, three doubles, nine RBIs and six runs during the series. He also ran his hitting streak to nine games.

Maldonado went 4-for-4, marking his first four-hit game since 2015. He launched a three-run homer in the seventh inning and also scored four times. Jose Altuve added three of Houston’s 15 hits.

Dermis Garcia had two of Oakland’s five hits, including a two-run double against Valdez in the sixth inning.

The game’s outcome was all but settled when the Astros sent nine batters to the plate in the third. Oakland’s Ken Waldichuk (0-2), a September call-up who was making just his fourth major league start, didn’t survive the inning. In 2 2/3 innings, he allowed five runs on five hits, with two walks and three strikeouts.

After Alvarez’s three-run double, Alex Bregman doubled in a run and scored on Yuli Gurriel’s single.

Maldonado and Jeremy Pena had RBI singles in the fifth. After Garcia got the Athletics on the board to make it 7-2 in the sixth, Alvarez added a second RBI double.