As Cardinals visit D-backs, Albert Pujols at top of his game 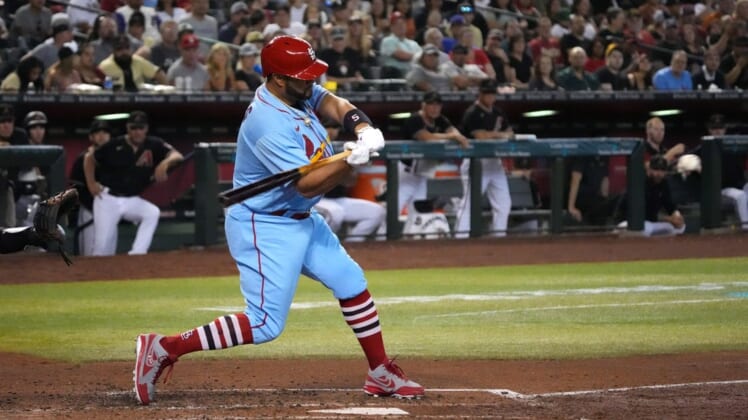 Albert Pujols no longer looks like a 42-year-old playing out the string toward retirement.

Pujols is one of the hottest hitters in the majors this month, and he will look to do more damage when the St. Louis Cardinals face the Arizona Diamondbacks on Sunday in Phoenix.

Pujols went 4-for-4 with two homers in the Cardinals’ 16-7 victory over the Diamondbacks on Saturday. That raised his total to 692 homers, four behind fourth-place Alex Rodriguez on the all-time list.

Perhaps more stunningly than the career achievements is that Pujols has been hotter than lava this month. He is batting .452 (14-for-31) with six homers and 13 RBIs.

“That’s the hard work I put in day in and day out,” Pujols said. “Nothing surprises me.”

Pujols’ homers off Arizona’s Madison Bumgarner traveled 429 and 437 feet. He also lined a rocket single that hit off the base of the wall in left.

There was heavy cheering in the opponents’ home stadium for all of Pujols’ exploits on Saturday night. And Diamondbacks manager Torey Lovullo was more than fine with that.

“I think all the baseball fans that are here watching Albert Pujols understand that they’re watching somebody who’s pretty special, who’s done it at a very high level for a very long time,” Lovullo said afterward. “And he’s just so professional and just such a good human being that I think the fans appreciate that.”

“It’s amazing,” Goldschmidt said. “I’m so happy for him personally and for our team. He’s a great leader. He’s doing something we might not ever see again.”

Goldschmidt went 3-for-6 with a homer and four RBIs on Saturday. The blast was his second of the series and sixth in 18 career games against the Diamondbacks, his former club.

Goldschmidt has 31 homers and 100 RBIs. It is the fourth time that the seven-time All-Star has reached the century mark in RBIs.

The Cardinals enter the finale with six straight wins and 17 of their past 21.

Kelly is 4-0 with a 1.64 ERA over his past nine starts. He hasn’t allowed a run in three of the outings, including Tuesday when he gave up four hits in seven innings in a no-decision against the San Francisco Giants.

Kelly, 33, defeated St. Louis on April 30 when he gave up two hits over seven scoreless innings. He is 2-1 with a 3.00 ERA in three career starts against the Cardinals.

The Diamondbacks had won eight of 12 games before losing the first two games of this series by a combined 21-8.

Arizona pitching has served up 12 extra-base hits — including five homers — in the first two games. The Diamondbacks have allowed 30 hits while producing just 12.

Left-hander Jose Quintana (4-5, 4.38) will be making his fourth start for the Cardinals. He is 1-0 with a 2.65 ERA in three starts since being acquired from the Pittsburgh Pirates.

The 33-year-old Quintana received a no-decision on Tuesday when he gave up two runs and four hits over five innings.

Quintana is 0-2 with an 8.57 ERA in four career starts against Arizona.

Cardinals catcher Yadier Molina will miss his second straight game after being placed on the restricted list Saturday for “business matters.”