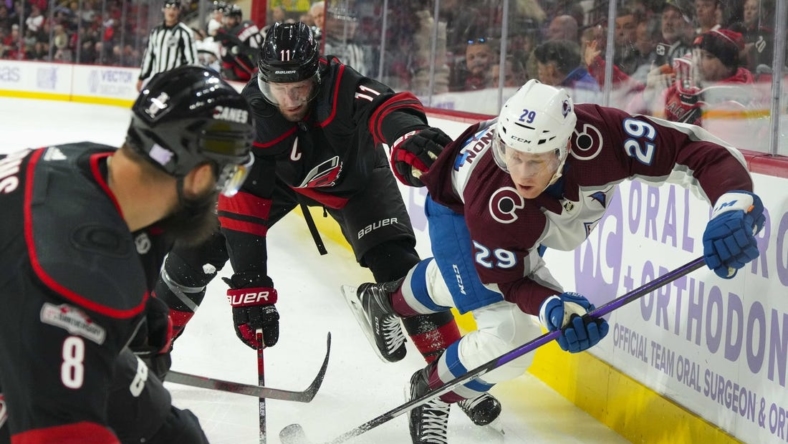 Artturi Lehkonen scored 1:55 into overtime to lift the Colorado Avalanche past the Carolina Hurricanes 3-2 on Thursday night in Raleigh, N.C.

The Hurricanes dominated portions of regulation, but the Avalanche took a turnover in overtime and made it count on Lehkonen’s shot from the right side. It was his fifth goal of the season.

Sebastian Aho and Martin Necas each scored their eighth goals of the season for the Hurricanes. Goalie Antti Raanta had 11 saves.

Necas scored the tying goal with 9:37 remaining on an odd sequence after Francouz lost his stick behind the net.

Colorado led 2-1 after two periods despite Carolina’s 28-11 advantage in shots on goal. By the end of the regulation, the shot totals stood at 47-13.

The third period ended with the Hurricanes on a power play, with 11 seconds carrying over to the beginning of overtime.

Rodrigues collected a loose puck on the power and play and fired it past Raanta for an unassisted goal. It was his sixth goal of the season, giving another boost to the Avalanche, which has the league-best power play by converting more than 37 percent of the time.

Aho’s goal drew the Hurricanes even at 7:14 of the second period. He converted after a second chance on the sequence, with an assist going to Martin Necas.

Necas has a team-high 13 assists and has racked up 21 points, a notable mark considering last season in 78 total goals he had 40 points. He’s more than halfway there just 17 games into the season.

Newhook scored just eight seconds after a neutral-zone faceoff, with the Avalanche showing skill in a quick breakout. Josh Manson had the primary assist on Newhook’s third goal of the season.

All of Newhook’s goals have come in road games against Eastern Conference opponents. Manson produced his first point of November.

Hurricanes forward Andrei Svechnikov played in his 300th career game, all with Carolina. The 22-year-old is the first player from the 2018 draft class to reach that milestone.

The Avalanche defeated the Hurricanes 4-1 last Saturday in Denver.