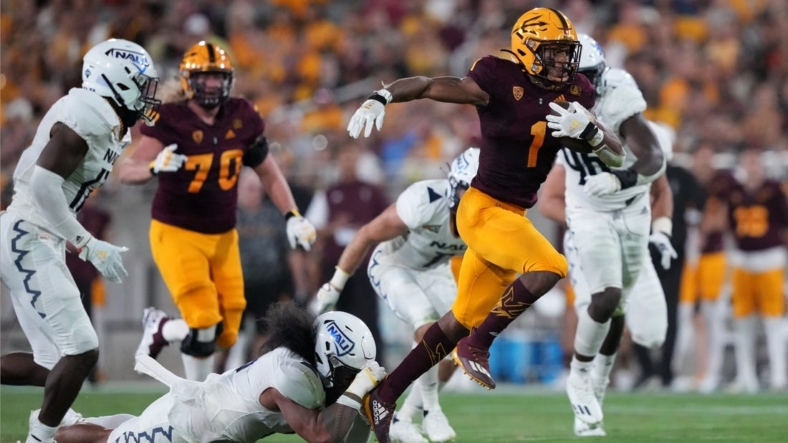 Xazavian Valladay and Emory Jones each rushed for two touchdowns as Arizona State routed Northern Arizona 40-3 on Thursday at Tempe, Ariz., in the season opener for both teams.

The Sun Devils started their campaign with a win amid an NCAA investigation of potential recruiting violations.

Jones’ touchdown runs of 1 and 17 yards in the second quarter helped Arizona State take a 24-3 lead in the halftime.

Northern Arizona was looking for its second consecutive win over an in-state opponent after upsetting Arizona last year in Tucson.

Arizona State increased its winning streak to 11 games over the Lumberjacks. The Sun Devils are 15-0-1 in the series’ past 16 games.

Valladay, a transfer from Wyoming, had a 4-yard touchdown run in the second quarter and a 27-yard score in the third quarter.

Valladay finished with 116 yards on 15 carries. Jones, a transfer from Florida, completed 13 of 18 passes for 152 yards with no touchdowns or interceptions.

Northern Arizona was held to 120 yards of total offense, including only 23 yards rushing on 23 carries.

Arizona State finished with 419 total yards on offense, including 267 yards on the ground.

Northern Arizona quarterback RJ Martinez was limited to 95 yards on 19-of-29 passes. He was intercepted twice.

The Lumberjacks’ lone score was a 47-yard field goal by Collin Robbins with five seconds left before halftime.

Northern Arizona finished with only seven first downs compared to 24 for Arizona State.

The Sun Devils next head to Oklahoma State for a Sept. 10 matchup. The Lumberjacks will visit Sam Houston on Sept. 10.