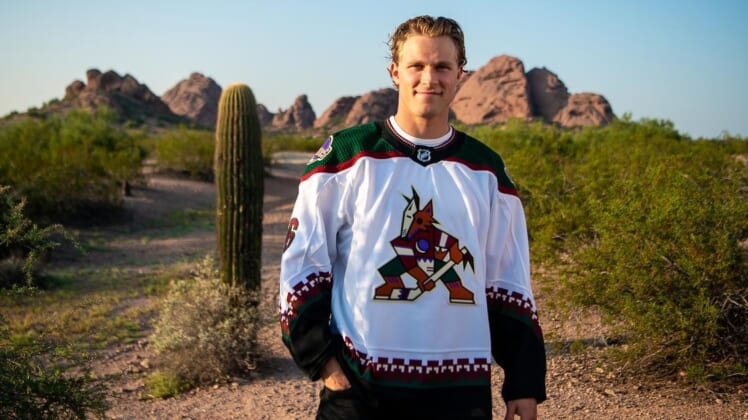 The Arizona Coyotes are going back to the past to address the future.

The club announced Monday that it is rebranding with a focus on “our vision to become a long-term winning team in Arizona and our dedication to impact, inclusivity, and innovation,” president and CEO Xavier A. Gutierrez said in a team statement.

The rebrand is starting with the re-introduction of the popular Kachina as its permanent logo. The team wore black Kachina-logo jerseys at some home games last season, and now is extending it to the white jerseys — last worn by the team in 2003.

The team adopted the Kachina logo in 1996 when it moved from Winnipeg. It represents the ancestral spirit of the Pueblo people, and the logo was a fan favorite. It was replaced in the 2003-04 season when the team moved to red as its primary color and a coyote head as the logo on the sweater. That uniform will become an alternate, with the Coyotes wearing it eight times at home in the upcoming season.

The hope is the logo will help the team reach the atypical hockey fan, bring the diverse Arizona community together and cultivate a new fan base, Gutierrez told ESPN.

“It represents a point of pride. It’s something that says, ‘I may not be what you think is the traditional sports fan, but this speaks to me. I can identify in it,'” he said. “We not only want to focus on our fans, but also our fans in waiting. In our research, we found that the logo resonates with people who aren’t hardcore Coyotes fans or hardcore hockey fans. That includes families and young females. It includes diverse communities, like Latina, African American and Asian communities.”

The Coyotes will wear the white Kachina sweater in their season opener Oct. 14 in Columbus against the Blue Jackets, and again Oct. 18 for their home opener against the St. Louis Blues. The Kachina logo will be featured at center ice at Gila River Arena throughout the season.

The team is facing off-ice questions as it opens the 2021-22 season, such as where it will play in the future. The city of Glendale, Ariz., broke off lease negotiations for the arena and said the Coyotes must find a new home after this season. Gutierrez told ESPN that despite longtime rumors the team will relocate, there are no plans to do so.

“We’ve been exploring new arena options for several months, and we do think there are options here. But I want to be very clear: We’re committed to Arizona. We want to be here,” he said.