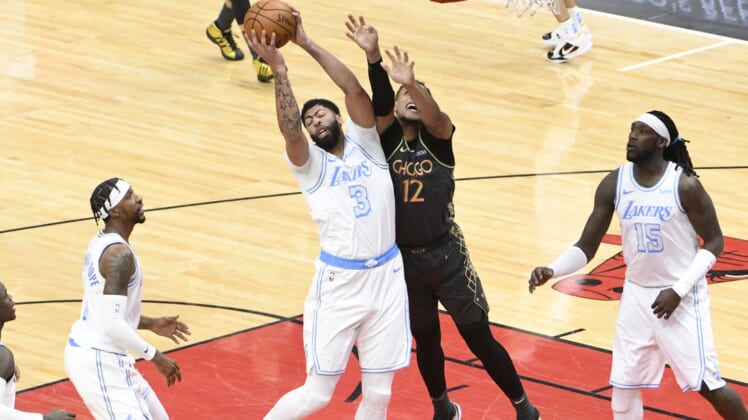 Anthony Davis scored a game-high 37 points on 14-for-21 shooting only a few miles from his childhood home, and the Los Angeles Lakers rolled to a 101-90 win over the host Chicago Bulls on Saturday night.

Los Angeles improved to a perfect 9-0 on the road to start the season. LeBron James notched a double-double with 17 points and 11 rebounds for the Lakers, who won for the seventh time in their past eight games.

Zach LaVine finished with 21 points and 10 rebounds to lead the Bulls, whose three-game winning streak came to an end. Coby White had 14 points, while Patrick Williams (13) and Lauri Markkanen (12) also scored in double digits.

Los Angeles beat Chicago for the second time this month, following a 117-115 victory on its home court Jan. 8.

Davis led all scorers with 26 points on 10-for-12 shooting before the break. The 30-point margin was Los Angeles’ largest lead of the first half, while the Bulls’ biggest advantage was two points early in the first quarter.

An 18-2 run keyed the Lakers’ surge in the first quarter. Kentavious Caldwell-Pope capped the scoring outburst with a 3-pointer to put Los Angeles on top 20-6 with 5:22 left in the session.

The Lakers played even better in the second quarter, posting a 34-16 scoring edge that ended with a driving layup by Dennis Schroder in the final minute.

The Bulls broke out of their malaise in the third quarter, tallying a 33-20 advantage to trim the deficit to 83-66. Denzel Valentine and White drained back-to-back 3-pointers for the Bulls, who also received a free throw from Williams to pull within 13 points. But Los Angeles finished the third quarter with two baskets by Davis to push the lead to 17.