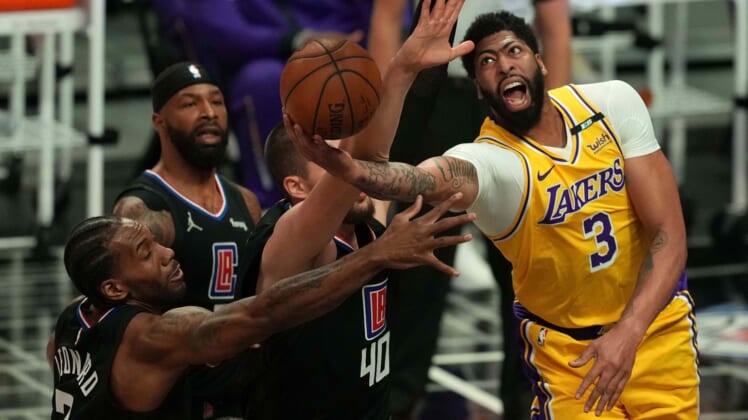 The slumping Los Angeles Lakers could be without both LeBron James and Anthony Davis when they visit the Portland Trail Blazers in Friday’s crucial Western Conference contest.

James will miss his third straight game due to an aggravated ankle injury, while Davis left Thursday night’s 118-94 loss to the Los Angeles Clippers due to back spasms. Davis indicated that an apparent right ankle injury won’t be an issue and that his availability will depend on his back.

“The ankle is fine. It wasn’t bothering me,” Davis said after the Lakers lost for the seventh time in the past nine games. “The back locked up pretty bad. It’s a little bit better now, we’ll see how it is tomorrow. … We’ll test it out but my plan is to play.”

Missing both players would be poor timing for the Lakers, who share the same 37-29 record as the Trail Blazers. Friday’s winner will claim the tiebreaker edge in the three-game season series. Los Angeles enters the game in the sixth spot in the Western Conference due to having a better conference record.

The loser of Friday’s game will fall into sole possession of seventh place with five games remaining. The top six finishers avoid the play-in round while the No. 7 through 10 seeds will participate in it.

Davis first was injured in the opening minutes Thursday after missing a 3-pointer. He backpedaled into signage near the sideline and fell to the court and grabbed his right ankle. He exited later in the first quarter and didn’t return, with the Lakers announcing Davis was dealing with back spasms.

Lakers coach Frank Vogel said the club will examine Davis on Friday before making a decision.

“We got to follow the lead with the medical team,” Vogel said. “We got to make the best decision for his health.”

The Lakers will also be without guard Dennis Schroder (health and safety protocols) for the fourth straight contest.

The Trail Blazers are hot after completing a 5-1 road trip. The victories were by an average of 21.4 points and the excursion ended with Wednesday’s 141-105 trouncing of the Cleveland Cavaliers.

“We’re playing our best at the right time,” star point guard Damian Lillard said. “We’ve had our ups and downs, but the feeling around our team is much better now. We were kind of searching for a while, but everything just clicked and came together.” 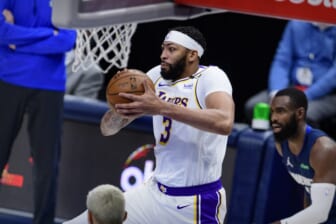 Friday’s game will be the first time Portland has played in front of home fans this season.

The Oregon Health Authority approved a 10 percent capacity, meaning roughly 1,900 fans will be in attendance. It will be the first time since March 10, 2020, that the Trail Blazers will have fans in the Moda Center due to the coronavirus pandemic.

“I think everybody is excited about it,” Portland coach Terry Stotts said. “I think we’re one of the last, if not the last team, to have fans. They make a difference. We’ve been out on the road, we’ve seen fans on the road for a while now. It’s going to be nice to come back Friday night against the Lakers and see people in the stands.”

Lillard has scored at least 32 points in three of the past four games. He is a stellar 23 of 43 from 3-point range during the stretch.

Lillard averaged 33 points as the Trail Blazers split the two earlier meetings with the Lakers. Davis missed the second contest (Feb. 26) due to a calf injury.