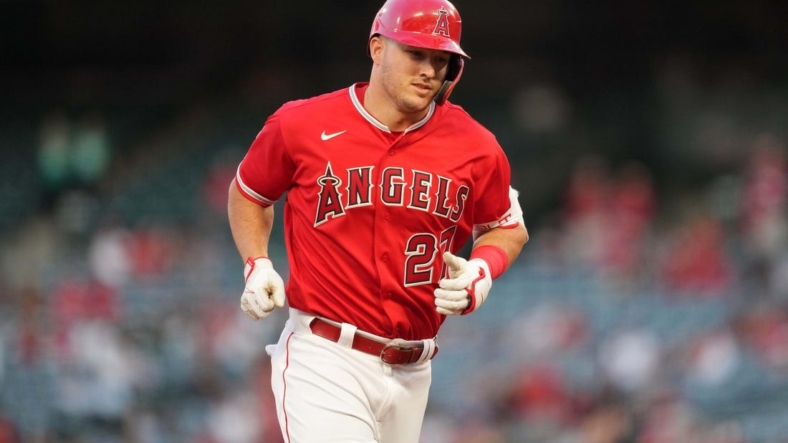 Mike Trout is due to play his 97th game of the season Wednesday afternoon when the Los Angeles Angels host the Detroit Tigers in Anaheim, Calif., a total not quite as high as the team and its star center fielder would like.

Trout missed 30 games during a five-week stint on the injured list from July 13-Aug. 18 because of a back injury, and that came after he played in just 36 games last season because of a calf injury.

So even though the Angels are out of the pennant race, Trout’s presence in the lineup the rest of the way is important.

“Just being out there with the guys and getting at-bats every day has been big for me,” Trout said. “I feel fine, I feel great.”

Even if Trout plays in every game the rest of the season, which is unlikely, he’d finish with 122 games played. It’s a far cry from the four-year stretch from 2013-16 when he played in at least 157 games each season.

Despite missing so many games, Trout is still putting up credible numbers. He hit his 31st home run of the season on Tuesday in the Angels’ 5-4, 10-inning win over the Tigers, his third straight game with a home run.

He reached the 30-homer plateau for the seventh time in his career.

“Everybody talks like he’s having a down year, but he has a (.971) OPS,” Angels interim manager Phil Nevin said. “That’s pretty good, especially for a guy who played hurt for quite a long time and had a lull of about 40 at-bats where he didn’t do much. So all in all, he’s still one of the best players in the game.”

Patrick Sandoval (5-9, 3.02 ERA) will start for the Angels on Wednesday in the finale of a three-game set as Los Angeles pursues a sweep. The left-hander is coming off one of his best starts of the season, when he outpitched Gerrit Cole and earned a 3-2 victory over the New York Yankees on Aug. 31.

He is 2-0 with a 1.84 ERA in two career starts against Detroit, and that includes his only career shutout last month. Sandoval tossed a four-hitter with no walks and nine strikeouts on Aug. 19.

Tigers utility man Kody Clemens, son of Roger Clemens, isn’t expected to play. That is, unless it’s another blowout and Tigers manager A.J. Hinch wants to use Clemens in a mopup role on the mound.

On Monday against the Angels, he gave up one run in one inning, but the outing included a strikeout of Shohei Ohtani, Clemens’ first career whiff. Clemens had Ohtani sign the baseball before the Tuesday game, Ohtani writing “What a nasty pitch!” on the ball. The third-strike pitch came in at 68.4 mph and caught Ohtani looking.

“He handled that really well,” Hinch said of Ohtani. “That was definitely the lightest moment of the day and probably a big memory for Kody. Maybe not as big a memory for Shohei, but what a great sport.”