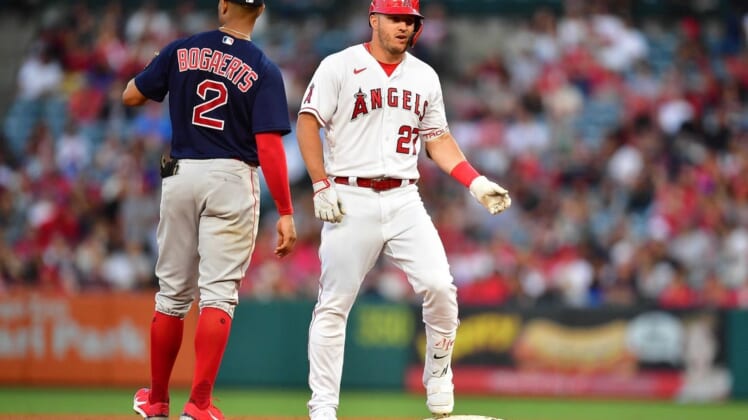 Christian Vazquez’s one-out single in the 10th inning drove home Trevor Story from second base to lift the Boston Red Sox to a 6-5 victory over the Los Angeles Angels Tuesday night in Anaheim, Calif.

The Red Sox registered their sixth consecutive win, while the Angels took their 13th loss in a row, setting a single-season club record. The Angels also lost 13 straight when they dropped the final 12 games of the 1988 season and the 1989 opener.

The game was the first for Angels interim manager Phil Nevin, who took over for manager Joe Maddon, fired earlier in the day. To make matters worse for Los Angeles, center fielder Mike Trout had to leave the game in the third inning due to a left groin tightness.

The Red Sox rallied from a 5-3 deficit with single runs in the sixth and seventh innings, sending the game to extra innings. Story began the 10th inning on second base as the designated runner, and one out later, Vazquez’s single to right field off Jaime Barria drove home the game-winner.

Matt Strahm pitched the bottom of the 10th for Boston. He struck out Jared Walsh and Max Stassi, then got pinch hitter Kurt Suzuki on a grounder to shortstop, stranding designated runner Jo Adell at second base to end it and earn his second save.

Tanner Houck (4-3) pitched a scoreless ninth inning to get the win over Barria (1-1).

The Angels took the lead against Red Sox starter Garrett Whitlock in the first inning when Shohei Ohtani doubled with one out and Trout followed with a two-run homer.

It was Trout’s 14th home run of the season and first since May 28.

The Red Sox responded with three runs in the top of the second inning against Angels starter Jose Suarez, benefitting from seeing-eye ground balls that found holes through the defensive shift.

In the inning, Boston got a double from Story, an infield single by Alex Verdugo, a walk by Vazquez, a run-scoring forceout from Christian Arroyo and RBI singles by Brian Dalbec and Enrique Hernandez. Suarez escaped further damage by getting Rafael Devers to hit into an inning-ending double play, keeping the Angels’ deficit at 3-2.

The Angels tied the game in the bottom of the second, getting singles by Juan Lagares and Tyler Wade, followed by an error by the first baseman Dalbec on a grounder by Andrew Velazquez that allowed Lagares to score.