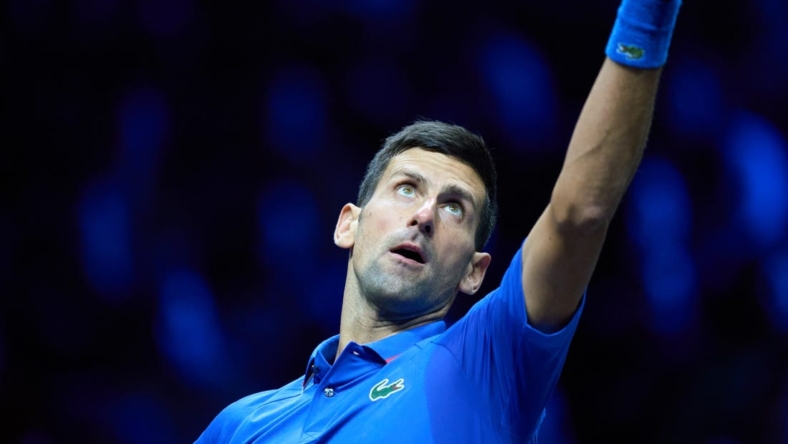 The all-Russian match was the round-robin opener for each player in the Red Group.

Rublev jumped out to a 4-1 lead in the first set and had two set points on Medvedev’s serve at 6-5, but Medvedev rallied to force a tiebreaker. Rublev then led 6-2 in the tiebreaker, but Medvedev knocked off four set points, then another at 7-6, before prevailing 9-7.

After Rublev pulled level with the only two service breaks of the second set, the third set went to a tiebreaker after neither player could break serve. Rublev again charged to a commanding lead, 6-3, but lost all three match points and another at 7-6 before finally winning 9-7.

The last point was a 37-shot rally.

Rublev said, “I was thinking about the US Open, because when we played in the quarterfinals in 2020, I think I was 5-1 in a tiebreak, also something like 6-2, but I was leading something similar in a tiebreak. But when I lost that set, I couldn’t play anymore, and I was thinking it cannot happen the same (again), I have to change something. I have to keep playing, because if I win one set, even if I lose in three sets, it’s still good, because here you have a group. So you have to fight for every point, every game, and I was able to win.”

He added, “The final tiebreak, the rallies that we had there were crazy. The last rally … I was cramping a bit already, but I was thinking, ‘One more, one more.’ You have to keep playing. For sure he felt the same, so just keep playing if you have the chance, just go for it.”

Djokovic’s win was more straightforward, with the five-time ATP Finals champion ending Tsitsipas’ hopes of ending the year with the No. 1 ranking.

“We have played some really close matches in the past few tournaments against each other,” Djokovic said. “It was very important to start off well. I held my serve really well throughout the match. I played a great tiebreak, very solid all the way through.”

Action resumes in the Green Group on Tuesday, with top-seeded Rafael Nadal of Spain opposing fifth-seeded Felix Auger-Aliassime of Canada in a matchup of 0-1 players, and third-seeded Casper Ruud of Norway and eighth-seeded Taylor Fritz of the United States clashing in a matchup of 1-0 players.