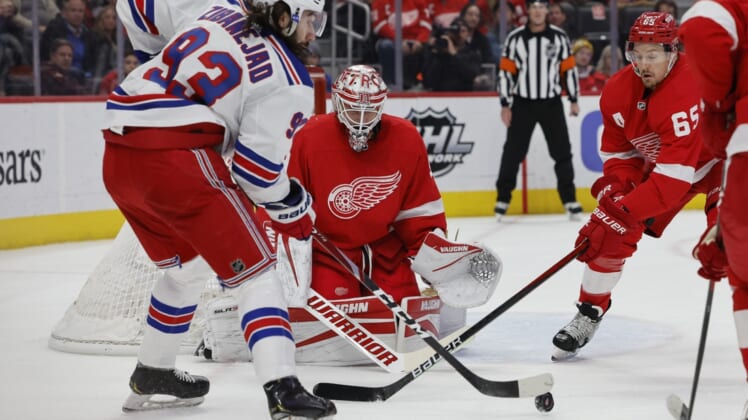 Andrew Copp scored the game-winning goal 1:34 into overtime to lead the New York Rangers to a 5-4 road win over the Detroit Red Wings on Wednesday night.

Copp took a pass from Artemi Panerin in front of the Detroit goal and buried the chance for the Rangers, who have won four straight.

Detroit lost its fourth in a row.

The Rangers took a 1-0 lead with 16:37 remaining in the first period on a goal by Ryan Reaves. Reaves tried to feed a pass across the crease, but ended up chipping the puck into the Detroit goal after the pass deflected back to him off the stick of Detroit’s Filip Hronek.

Detroit answered with 10:01 remaining in the first when Michael Rasmussen fired an innocent looking shot from the left face-off circle that eluded Rangers goalie Alexandar Georgiev and tied the game at 1.

Detroit then took a 2-1 lead with 2:37 remaining in the first on a goal by Jakub Vrana, who rifled a shot from the right-face off circle through the legs of Georgiev for a power-play goal.

But New York tied the game just 11 seconds later when Filip Chytil redirected a point shot by Patrik Nemeth into the goal to make it 2-2.

The Red Wings regained the lead at 3-2 just 29 seconds into the second period on another power-play goal, this time by Tyler Bertuzzi, whose slap shot from the top of the face-off circles beat Georgiev to the stick side.

New York then tied the game at 3 with 11:45 remaining in the second when Panarin took a pass from Frank Vatrano in the right face-off circle and buried the chance inside the far post.

Detroit took a 4-3 lead with 14:04 remaining in the game when Adam Erne scored on a backhand shot from in between the face-off circles, but the Rangers tied the game at 4 with 3:38 left on a power-play goal by Chris Kreider.