EXCLUSIVE: Anderson Silva says UFC ‘uses you, kicks you out, and when you’re out they try to destroy your career’

Despite an absolutely legendary run as one of the greatest competitors in UFC history, there was a lot Anderson Silva did not like about his time in the promotion. Especially the disrespect he says he felt towards the end of his tenure with the MMA world leader.

Silva’s time in the UFC ended close to two years ago. However, he has remained in the spotlight by making the switch to boxing and progressing his career as an actor. Both have and will keep him busy in the present and near future.

Silva, 47, will also compete in the co-main event of a boxing card on May 14 in Dubai, which will include the return of boxing legend Floyd Mayweather, Jr. in a main event exhibition bout. “The Spider” says he feels blessed to be competing on the same card as “Money” and is as happy as can be in his current life as a pugilist and “white belt” actor. However, things weren’t always happy for him in his sports career.

Anderson Silva felt disrespect from Dana White and the UFC

After winning his first 16 fights in the Octagon and building a legendary reputation as the greatest middleweight in UFC history, Silva would go 1-7-1 in his next nine fights. Much of that time came during his late 30s and against elite competition like former and current UFC champions Michael Bisping, Daniel Cormier, and Israel Adesanya. It was during that time, and then when his promotional tenure ended in 2020, that he says he felt disrespect from the promotion, and its President Dana White.

“When I was done in UFC, everybody — especially Dana White — said, ‘Oh, Anderson can’t fight anymore. Nobody in the same age [group] with Anderson can fight, it’s terrible,’ and blah, blah, blah. And talking a lot of sh*t about me,” Silva told Sportsnaut. “And I feel disrespected because it doesn’t matter what happened — fight is fight. You can win, you can lose.

“When you make a success of [MMA], the one thing you need to do for your fighters is [give] respect. In that, I feel no respect. But I don’t care because when I stop fighting, I’m gonna stop fighting because I say I’m gonna stop it,” he continued. “Nobody can say for me I [should] stop. No one can say for [anybody] you need to stop now. Nobody. I’ll stop when I say I’m done.”

Silva: ‘I had a good time in UFC, and bad times too’

One of the biggest contentions he has with his experience with the MMA world leader is what he feels is a lack of respect for the legacy of competitors in and outside the promotion. In his mind, the organization uses fighters up and then sends them packing. However, when they dispose of athletes they believe are no longer useful to them, he claims they also look to damage their brand and value outside the promotion. 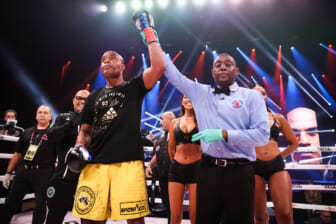 “That’s the problem for the people in this sport, especially UFC because UFC doesn’t respect the legacy that fighters have. They try to use you and kick you out,” says Silva. “And when you’re out, they try to destroy your career [so] you don’t fight anywhere. This happened [to] a lot of fighters. People don’t think about that. I had a good time in UFC, and bad times too. The bad time for me is the experience I have behind the scenes. But inside the cage, inside the fight, I do my best. It’s the only time I have control. Outside I don’t have control.”

Fighter pay has been a hot button topic in MMA circles for years but has jumped back to the forefront once again as many former UFC champions like Frank Mir, and Tyron Woodley have moved over to boxing and claim the pay in the sweet science is far better than what they made at their peak in the UFC. Silva alleges that was also the case for him at the end of his UFC run, despite being one of the greatest fighters in promotion history.

“In my fight in Mexico [against Julio Cesar Chaves, Jr. in 2021], I made more money than my last three fights in MMA,” Silva revealed. “I don’t like to talk about the bad, and people say, ‘Oh now you’re out of UFC and you talk bad sh*t about [them],'” he added. “It was good for me sometimes and it was good for UFC too. It’s done it’s over. But it’s important I say that, everything I say about the situation because this is what happened to me.”

“Lord of the Streets” made its Tubi premiere on April 22. You can give the film and Silva’s performance as the bad guy enforcer Axel a watch here.