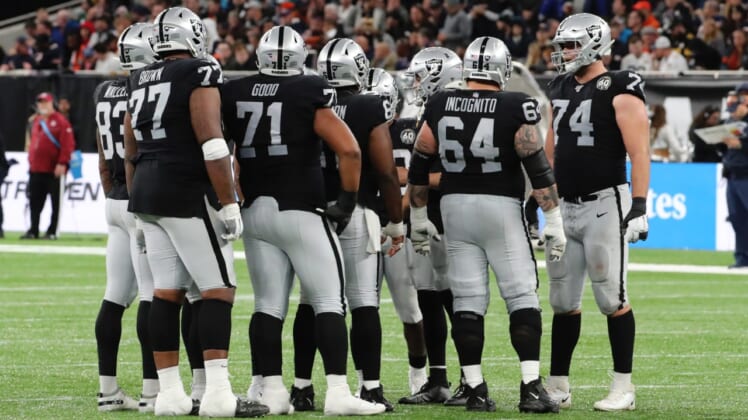 The Las Vegas Raiders made a multitude of high-profile player acquisitions in the 2020 NFL Draft and also in free agency. Their signing of key veterans on both sides of the ball could mean a distinct advantage heading into what could be a much different season.

There’s been no Las Vegas Raiders minicamps. There’s been no in-person OTAs. The Raiders have been unable to conduct official drills, in-person meetings, or other activities due to the COVID-19 pandemic.

Despite the shared experience they are feeling along with the NFL’s other 31 teams, could the Raiders offseason moves – particularly to sign impact veterans on defense – give them a leg up come the start of the season?

The Las Vegas Raiders enter 2020 with a slew of important returning veterans – most of whom skew on the younger side of the age scale. Almost their entire offensive unit returns with a veteran franchise quarterback at the helm. They’ve added some new rookie weapons, but undoubtedly it will take time for them to settle in and gain a true connection with Derek Carr.

With Carr now in his third season in the Gruden offense, coupled with returning players Hunter Renfrow, Josh Jacobs, Darren Waller, a healthy Tyrell Williams, and more, expectations are high for Raiders offense that could not find the end zone in the second half last season. That year of experience and familiarity is going to be massive for this unit. They need to be clicking on all cylinders for the Raiders to make a true playoff push. Add in the leadership and skills of Jason Witten, and if you’re a member of Raider Nation, you should expect a high-flying offense in 2020.

On defense, the same can be said although there are a lot of new faces. Usually, time for a “new” team to jell is required, but the Raiders adding veteran linebackers Cory Littleton and Nick Kwiakoski helped them upgrade in an instant. Both pros at LB are game tested and ready and have been working on the playbook throughout the lockdown.

The Raiders also added veteran beef up front with Maliek Collins to go along with returning players like Maxx Crosby, Clelin Ferrel, Mo Hurst, and PJ Hall. They might not be polished or proven as a unit, but having that mix and boost at both LB and safety with Jeff Heath, Prince Amukamara and Damrious Randall now look even better in wake of the lockdown.

This all maters greatly in the time of COVID-19. We may very well see rookies this year struggle unlike anytime before. While players like Henry Ruggs III will undoubtedly be successful in the Raiders system, the adjustment period from college to the pros could be stunted with the unprecedented offseason.

The Las Vegas Raiders find themselves in a spot like every other team, but being in Year 3 of their rebuild under Jon Gruden, they’re closer than some teams in the AFC West who have promise but lots of unanswered questions.

Denver likes young quarterback Drew Lock but he’s yet to face the real 16-game test of an NFL starter. The Chargers dumped veteran Philip Rivers and have turned their offense over to veteran backup Tyrod Taylor. The Chiefs are the Chiefs and return almost their entire Super Bowl champion team from a season ago. Still, of the AFC West’s four teams, the Raiders have more stability between Denver and LA.

Certainly Raiders rookies like Damon Arnette, Amik Robertson, Bryan Edwards, and Lynn Bowden Jr. will have an impact. It may just take a little more time than in a season where the full offseason regimen wasn’t canceled due to a global pandemic.

What general manager Mike Mayock and Gruden were able to do this offseason positions this team well despite the challenges of the coronavirus shutdown. Much remains unknown to how this season could unfold. Talk of starting the season a month late, playing games with no fans in stadiums, et al, continue to be topics of conversation.

With all the unknowns, the Raiders organization and its fans should feel good about this team coming out of the gates in a bit better shape than some due to that veteran influence and continuity of a team in the third year of building.

What do you think? Will the Las Vegas Raiders veteran players and continuity help them despite the COVID-19 shutdown and it’s impact?