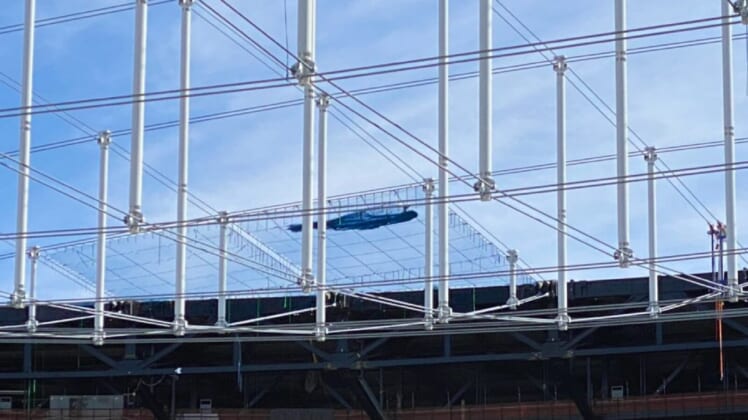 The 7-acre plastic polymer Allegiant Stadium roof is a step closer to installation as reports indicate work is underway.

First, it was the stainless-steel cable system. Now, it’s a whole lot of plastic going up to make the Las Vegas Raiders Allegiant Stadium roof one step closer to completion.

As our source on the project told us earlier this week, and according to a report in today’s Las Vegas Review-Journal, netting needed to install the massive ETFE roof is being installed this week.

According to Rick Velotta’s report, after a tour of Allegiant Stadium yesterday, two sections of netting are being installed in the northeastern corner of the Allegiant Stadium roof. The netting stretched across the steel cable netting which was completed late last week, was visible in several pictures posted by Velotta and fellow reporter Mick Akers.

With an announced delay of the installation of Allegiant Stadium’s translucent roof last month, concerns of whether or not the Raiders would finish the stadium on time again arose. But after contractor Mortensen|McCarthy surprised everyone late Friday by announcing the cable net completion via social media, progress on completion of the roof has accelerated rapidly.

The stadium progress over the past two weeks has been stunning. Since the Silver and Black Today was part of a private tour a few weeks ago, thousands of more seats have been installed, the 80 x 215-feet lanai doors on the north end of the stadium have been completed, and the natural grass field tray is also speeding toward completion.

The field tray, which the report says utilizes 76 electric motors to move the 4-foot deep field tray in and out of the stadium for game days, will be used only by the Raiders. UNLV football, the stadium’s only other tenant, will use a permanently fixed field turf surface for their games.