A two-time All-Star who just signed a massive contract extension this summer reportedly is hoping for a trade to the Los Angeles Lakers sooner than later.

After a terrible start to the season, the Los Angeles Lakers are slowly but surely inching their way back into playoff contention as they close in on the midway point of the 2022-2023 season. They are 13-18, two and a half games out of the last two spots for the NBA Play-In tournament, and are a game over .500 over their last 15.

Their improved play over the last month has reportedly given the front office the impetus to seek out some blockbuster moves ahead of the NBA trade deadline. The recent injury to superstar Anthony Davis has only intensified that desire to happen sooner rather than later.

As the Chicago Bulls continue on a path to a surprise losing season, they have been identified as a possible trade partner for the Lakers. And while 2021 All-Star Zach LaVine may not be an option this season in the eyes of one NBA executive, the groundwork for LaVine to take his talents to LA at least next season has already been laid.

Zach LaVine hoping for a trade to Los Angeles Lakers

Part of the struggles for the Bulls is the reported divide between LaVine and the organization. They aren’t on the same page at the moment, and his chemistry with fellow All-Star DeMar DeRozan has been non-existent this season.

In a conversation with Sean Deveney of Heavy.com on Wednesday, an Eastern Conference executive explained that while it may take a lot more losing for the Bulls to completely blow things up ahead of the February NBA trade deadline, LaVine and his agents — who also represent Lebron James — want him to land with the Los Angeles Lakers once he escapes Chicago.

“They’re not going to trade away Zach LaVine during the season. They will have an easier time with moving on from DeMar DeRozan if that is where they go … LaVine wants to go to the Lakers, that has been pretty clear for a while now. The agents [from Klutch Sports] want him to be in Los Angeles, he is a UCLA guy and they did some rattling about his contract last offseason, to kind of lay the groundwork if things blew up. Which they seem to be doing.” 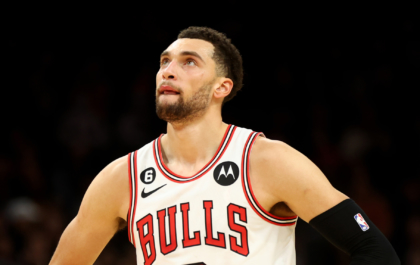 While the exec believes a deal is unlikely this season, it actually would benefit the Bulls to get out from under LaVine’s $215 million deal sooner and land a couple of future first-round picks in the process. By making a trade this season, they would not have to worry about moving him for fair value — which could take a while — and use the free space in NBA free agency much sooner.

James Harden, Kyrie Irving, and Draymond Green are a few of the players that could be available next summer.