The Los Angeles Angels’ Shohei Ohtani, who was both the starting pitcher and the starting designated hitter for the American League in the All-Star Game, said he was trying to “let it rip” on the mound because he knew he was throwing only one inning on Tuesday night.

His fastball topped out at 100.2 mph, the first time he hit triple digits in a game since his first start of the season, April 4 against the Chicago White Sox.

The All-Star Game cleats, hand guard and foot guard worn by Ohtani, who made history as the first two-way All-Star, are headed to the Baseball Hall of Fame in Cooperstown, N.Y. Ohtani was the winning pitcher in the American League’s 5-2 win at Coors Field in Denver.

Asked what he thinks about “Ohtani mania” around the world, Ohtani said through translator Ippei Mizuhara: “I’m happy for that. But if more people are watching baseball, it makes me happy and it’s good for the sport.” 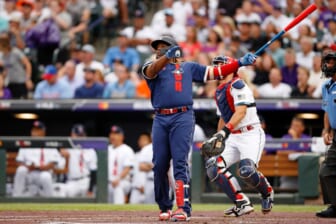 –Toronto Blue Jays players figured in the first three runs of the game.

Marcus Semien drove in the first run with a single in the second inning, Guerrero hit his solo homer to give the American League a 2-0 lead in the third, and he then drove in Blue Jays teammate Teoscar Hernandez with a groundout in the fifth after Hernandez had doubled.

–Milwaukee Brewers right-hander Corbin Burnes, who struck out 58 before he issued his first regular-season walk this year, walked the first batter he faced Tuesday, the Yankees’ Aaron Judge, on four pitches.

–Adam Frazier joined Hall of Famer Bill Mazeroski as the only Pittsburgh Pirates’ second basemen to start an All-Star Game.

–The All-Star uniforms didn’t get great reviews on social media.

Brett Anderson, a pitcher for the Milwaukee Brewers, posted on Twitter: “MLB should just let the players wear their own uniforms instead of these slow pitch softball ones.”

–Freddy Peralta became the first Brewers’ pitcher to strike out the side in an All-Star Game. He got all three batters swinging in the seventh: Oakland’s Matt Olson, Boston’s J.D. Martinez and Texas’ Adolis García.