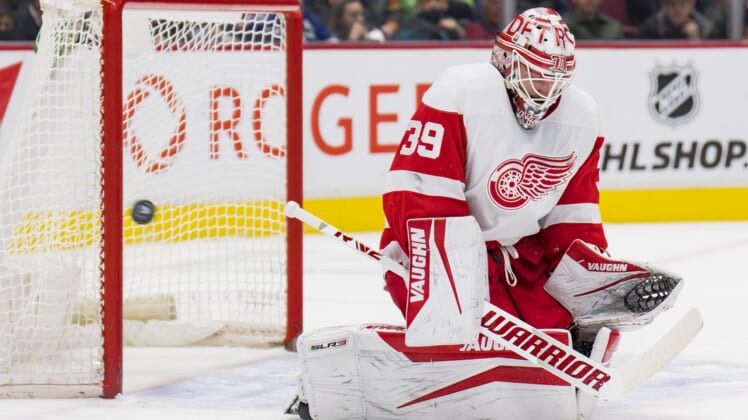 Pius Suter scored the lone goal, in the second period, as the Red Wings snapped a six-game losing streak (0-5-1).

It was Nedeljkovic’s second shutout of the season and the fifth of his NHL career. His save total was the highest in a shutout by a Detroit goaltender since Hall of Famer Terry Sawchuk stopped 50 in a game against the New York Rangers in 1959.

After a scoreless first period, the Red Wings got on the board at 8:09 of the second, just as a Vancouver power play ended.

The Canucks turned over the puck at the top of the faceoff circles in the offensive zone, with Suter gaining control and passing to Vladimir Namestnikov on the right wing to start a two-on-break.

Namestnikov carried the puck over the blue line and passed back to Suter when he reached the faceoff circles. Suter slid the puck between Demko’s pads as the goalie went from one side of the net to the other.

It was Suter’s 12th goal of the season, two shy of the total he had in the 2020-21 campaign as a rookie with the Chicago Blackhawks.

Both goalies stopped breakaways in the final 1:18 of the second. Demko thwarted Namestnikov, then Nedeljkovic stopped Conor Garland’s backhander with 35 seconds left.

Red Wings defenseman Moritz Seider, a candidate for the Calder Trophy as the league’s rookie of the year, dropped to the ice to block a shot by Vancouver’s Quinn Hughes in the final second of the second period to assure Detroit would take the lead into the third.

Vancouver star Elias Pettersson returned after missing the previous two games with an upper-body injury, but the Canucks were without fellow forward Nils Hoglander (lower body).