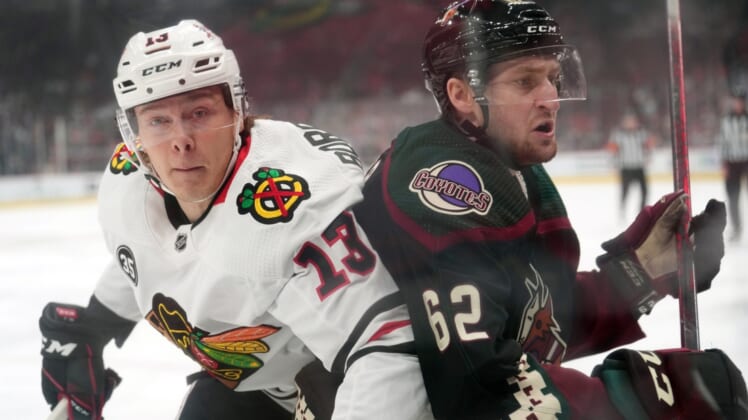 Alex DeBrincat notched his 40th goal of the season in overtime and Alex Vlasic netted his first NHL goal as the visiting Chicago Blackhawks claimed a 4-3 victory over the Arizona Coyotes Wednesday in Glendale, Ariz.

DeBrincat, whose career high is 41 goals, capped a two-point game by burying a snapshot with 37 seconds remaining in overtime.

The Blackhawks have only two wins in their last 12 outings.

McCabe opened the scoring 42 seconds into what became a back-and-forth game. During a scramble, McCabe pounced on the loose puck during a scramble for his fourth goal of the season.

Then, Kubalik’s 14th goal of the campaign doubled the lead with a rebound tally that finished off a flurry of chances at 15:32 of the opening period.

Hayton gave the hosts a jolt of life when he pounced on a rebound for his ninth of the season past the midway point — a goal assisted by alternate captain Andrew Ladd, the former Blackhawks forward who was playing in his 100th NHL game.

However, Vlasic — the 2019 second-round draft choice who signed after finishing his junior year at Boston University — made it a 3-1 game at 16:25 of the middle frame when his point shot bounced off the skate of a defender and into the net.

To their credit, the Coyotes didn’t fold. Smith, who joined Arizona after his junior year at Minnesota State, pulled the Coyotes within one by burying a rebound for his first NHL tally with 10:08 remaining in regulation.

Stralman tied the game four minutes later when he was left open in the slot and ripped a top-corner shot for his sixth of the season and forced overtime.