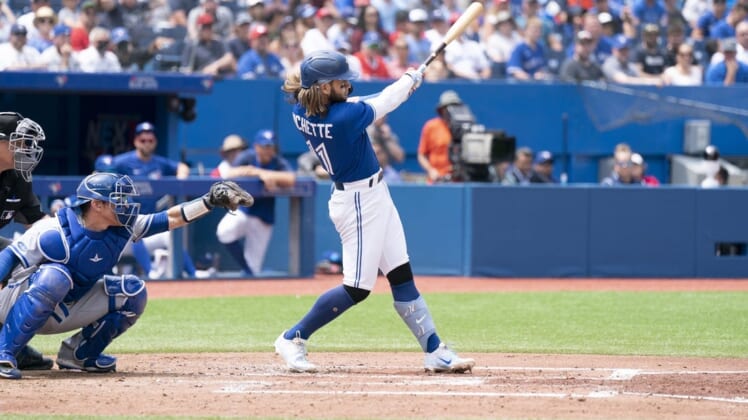 Kirk’s 11th homer of the season came after Vladimir Guerrero Jr. led off with a bloop single against reliever Wyatt Mills (0-1). Guererro went 2-for-4 with two runs.

Jordan Romano pitched a perfect ninth to earn his 20th save for Toronto.

The Blue Jays took three of four games from the undermanned Royals, who had to call up several players from the minors for the series. Kansas City played the series without 10 roster players who did not meet Canada’s COVID-19 vaccine requirements.

The Blue Jays completed a 5-1 homestand after returning from a 1-6 road trip. Toronto is 4-1 under interim manager John Schneider, who replaced the fired Charlie Montoyo on Wednesday.

The Royals scored once in the first inning on singles by Nicky Lopez, Vinnie Pasquantino and Edward Olivares.

Bubic pitched around a pair of two-out singles in the bottom of the second.

Toronto tied the game in the bottom of the third. Both Santiago Espinal and Guerrero had infield hits to third base with one out. One run scored when Bobby Witt Jr. committed an error on Kirk’s grounder to shortstop. Bo Bichette followed with a sacrifice fly to make it 2-2.

After Matt Chapman doubled in the fourth inning, Bubic retired 10 straight batters before he hit Bradley Zimmer with a pitch with two outs in the bottom of the seventh. But Bubic ended the inning on a flyout by Espinal.