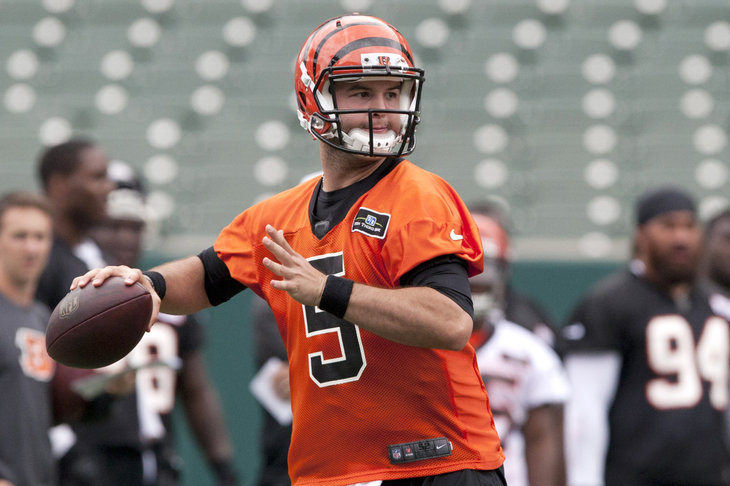 When Cincinnati Bengals quarterback Andy Dalton went down with what could be a season-ending fracture on his throwing thumb last Sunday against Pittsburgh, backup AJ McCarron finished the game with a decent performance, under the circumstances. He threw two interceptions, but also passed for two touchdowns and 280 yards in a losing effort against the Pittsburgh Steelers.

After it was determined Dalton would be out for an extended period, McCarron compared his situation to that of Tom Brady, who replaced an injured Drew Bledsoe in 2001 and led the Patriots to the Super Bowl.

He also referenced Brett Favre as a quarterback he would like to emulate, pointing to Favre’s childlike enthusiasm when he was on the field.

“It always looked like he was that four-year-old kid that just won the starting job by raising his right hand and his left hand, and getting it correct and being the only one,” he said, via ESPN.com.

The comparisons may have been viewed as cockiness to people on the outside, but the Bengals were used to McCarron being long on confidence. During meetings with several teams prior to the 2014 NFL draft, McCarron said he believed he was worth a first- or second-round pick and that he would take the league by storm.

This apparently didn’t sit well with some general managers, and McCarron fell all the way to the fifth round, where the Bengals selected him. It wasn’t just his play on the field at Alabama that attracted Bengals coach Marvin Lewis and his staff, but his personality.

McCarron’s current situation is similar to Brady’s, to a point. Both were drafted in the middle rounds and each got an opportunity to prove their worth after their respective starting quarterbacks got hurt.

But that’s as far as the comparison goes, at least for now. Brady’s unexpected success doesn’t happen to every backup who replaces a starter for a length of time. Expectations are different when you come in during a game than when you become a replacement as a starter, something McCarron hasn’t done in his short NFL career until now.

Is McCarron cocky, or confident? Well, maybe both, and that’s not always a bad thing. Not an “aw, shucks, I hope I don’t screw this up” attitude. It’s that self-assurance that helped him almost win a Heisman Trophy and led Alabama to two national championships.

His team needs him to step forward and take charge after the devastating loss of its starting quarterback.

McCarron will have his first chance to prove himself as a starter tomorrow against the San Francisco 49ers and their 27th-ranked defense. All that talk will look silly, though, if he does screw it up.