Ailing Lakers to face Mavericks as season slips away 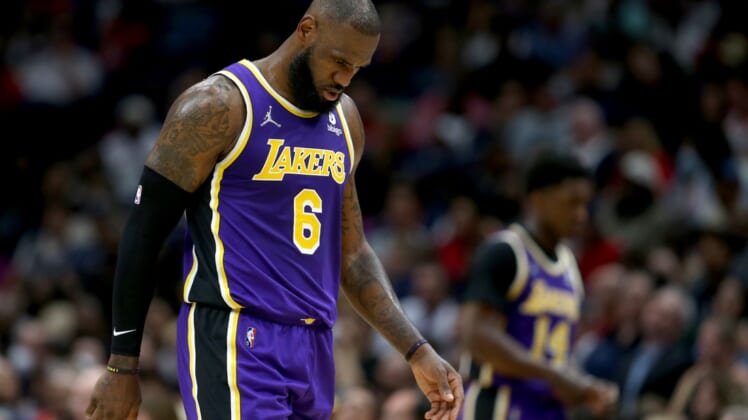 The Los Angeles Lakers continue to hobble toward the finish line.

Nursing a “horrible” ankle injury, superstar LeBron James is listed as doubtful for Tuesday night’s game between the Lakers (31-43) and the host Dallas Mavericks (46-29).

James sprained his left ankle in the first half of Los Angeles’ 116-108 setback at the New Orleans Pelicans on Sunday. The four-time NBA MVP finished the game with 39 points and nine rebounds, but the Lakers dropped their second consecutive game and are clinging to 10th place in the Western Conference with eight games remaining.

“I mean, from the time I turned my ankle, I felt a sharp pain run up my leg. It started getting hot. And I’ve been there with ankle sprains before,” James said. “But I didn’t want to come out of the game because I understood (the importance). I mean, I just wanted to win the game. I understood how big of a game it was for us.”

“It feels like another wasted opportunity obviously for myself and for our team,” James said.

James, 37, admitted he lost his burst after stepping on the foot of Jaxson Hayes in the second quarter. That limited him to playing on the perimeter.

Fellow Lakers star Anthony Davis returned to practice Monday after missing the last 16 games with a foot sprain, but he also is listed as doubtful for Tuesday.

While the Lakers took a step in the wrong direction, the Mavericks recorded a 114-100 victory over Utah on Sunday to move a game ahead of the Jazz in a bid to secure the fourth seed in the Western Conference. Both teams have seven games remaining.

“We haven’t done anything,” Dallas coach Jason Kidd said. “Our next opponent is the Lakers, and that’s all we’re focused on.

“We did what we had to do (Sunday), and that was protect home. Now our next opponent is the Lakers, who are fighting for something, too. So we now have to turn the page and get ready for LeBron and that group.”

Reggie Bullock recorded season-high totals in made 3-pointers (seven) and points (23) on Sunday. That performance was in stark contrast to his previous two games, during which he made 3 of 19 shots from the floor — including 1 of 12 from 3-point range — and totaled seven points.

Bullock struggled mightily in two games vs. the Lakers this season, with all seven of his points coming in the encounter on March 1. He made 2 of 13 shots from the floor in the two games, including 1 of 11 from 3-point range.