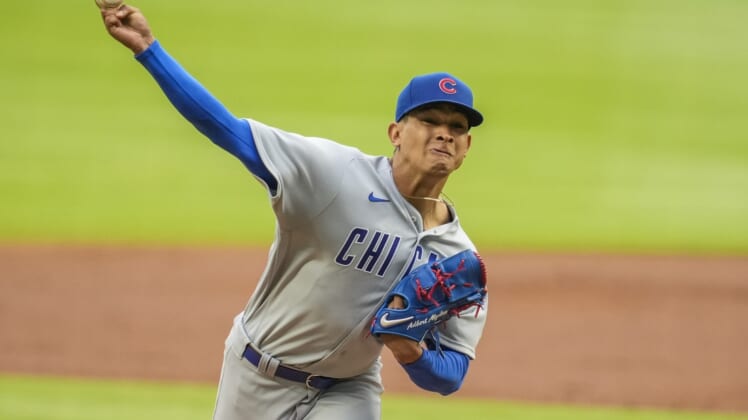 Adbert Alzolay earned his first win of the season and the visiting Chicago Cubs broke out of their offensive malaise on Thursday to defeat the Atlanta Braves 9-3 and snap a five-game losing streak.

Alzolay (1-2) pitched six innings and allowed two runs on four hits, with one walk and six strikeouts to help the Cubs avoid their first four-game sweep against the Braves since July 2005. Alzolay also picked up his first major league hit.

The Cubs bounced back from enduring back-to-back shutouts and amassed 16 hits, with each player in the starting lineup getting at least one. Anthony Rizzo had three hits, with Jason Heyward, Matt Duffy, Kris Bryant and Nico Hoerner each adding two.

Chicago had combined for 13 hits over the first three games of the series. The Cubs are averaging 7.4 runs in their 11 wins.

The losing pitcher was Bryse Wilson (1-2), who gave up four runs on seven hits, two walks and one strikeout in three innings.

The Cubs got two runs in the first inning on an RBI single by Bryant and a balk by Wilson, who stopped his windup and allowed Duffy to score.

Chicago made it 4-0 in the third on a sacrifice fly by Javier Baez and a single by Heyward.

The Braves got a run back in the fourth on Austin Riley’s single, but stranded two runners.

In the fifth, Heyward drove in a run with a double, and another scored when Hoerner’s popup that dropped just beyond the grasp of second baseman Ozzie Albies.

Atlanta scored a single run on Marcell Ozuna’s long solo homer, his third homer of the season, to lead off the bottom of the sixth, but the Cubs put the game away with two more runs in the seventh. Jake Marisnick hit his second home run of the season, a solo shot, and Duffy added an RBI single.

In the bottom of the seventh, Ronald Acuna Jr. drove in his 18th run with a single.

Chicago tacked on a run in the ninth on a sacrifice fly from Willson Contreras.

The Braves have won five of seven games against the Cubs this season.

The Cubs begin a three-game series at Cincinnati on Friday. The Braves remain home for a three-game weekend series with Toronto.