Aaron Rodgers has another MVP trophy on the mind 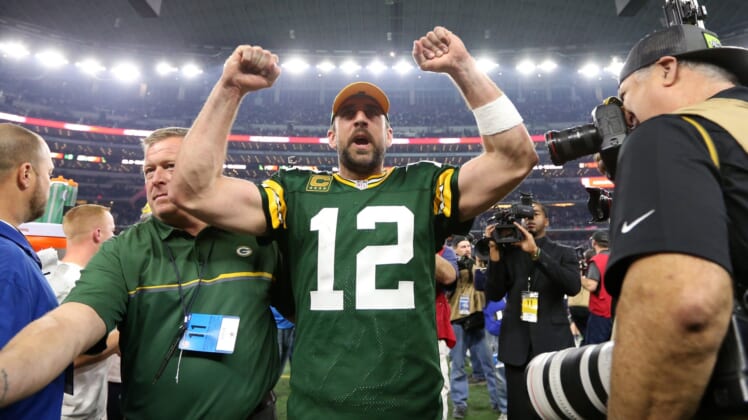 Green Bay Packers quarterback Aaron Rodgers is coming off a rough season that saw him miss more than half the campaign due to a broken collarbone.

It was the second time in his career that he was sidelined due to this injury, and the first time around his comeback was epic. Following his first broken collarbone in 2013, Rodgers came back with a vengeance to win the NFL MVP award in 2014.

Now he’s hoping history repeats itself: “I plan on doing that again,” he said with his trademark smile, per the team’s official website.

Rodgers also gave an update on his health, which should make Packers fans happy.

“I’m feeling great,” Rodgers said regarding his surgically repaired collarbone. “I’m back to my workouts. I was playing golf on Wednesday out in Scottsdale in the pro am, so if I can do that, you know I’m feeling pretty good.”

As we all know, however, it’s going to take more than Rodgers for the Packers to have a successful campaign in 2018. The defense in particular needs some huge improvements after another disappointing showing in 2017. Rodgers is well aware of this, commenting, “We have to play championship defense.”

He also is happy Joe Philbin is back coordinating the offense.

“Offensively, we have to get back to what we were doing in ’11. Thankfully the guy who was offensive coordinator in ’11 is back, Joe Philbin.”

Another big issue facing the Packers is that Rodgers could be without at least one of his top receivers. It’s highly likely Jordy Nelson or Randall Cobb will be released this offseason after the team’s huge extension to Davante Adams.

Speaking of extensions, it’s been reported that Rodgers himself is in the beginning stages of negotiations with Green Bay to make him the highest-paid quarterback in the NFL. If it doesn’t happen before the season begins, we’re pretty sure another MVP trophy will do nothing to hurt his case.