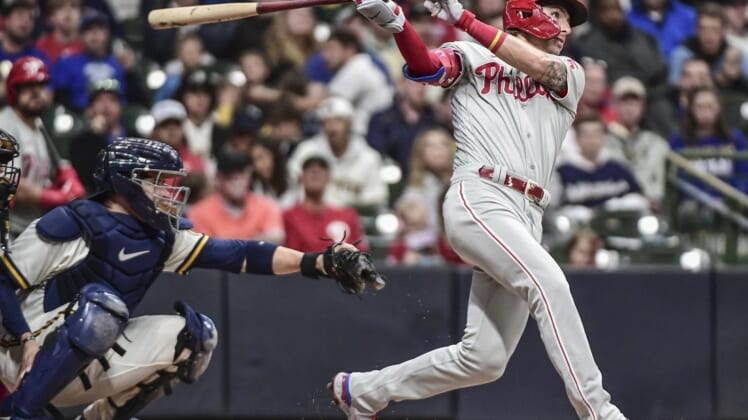 Nola (4-4) allowed four hits, struck out six and didn’t walk a batter en route to winning a third consecutive start for the first time since May 2019.

Bryson Stott and Kyle Schwarber each had four hits and two RBIs for the Phillies, who have won all five games since Girardi was fired on Friday and replaced by interim manager Rob Thomson.

The Brewers, meanwhile, were shut out for the third time in their five-game losing streak. They have dropped seven of eight since climbing a season-high 14 games above .500 on May 30.

Rowdy Tellez had two hits for the Brewers.

Houser struck out four of the first seven batters he faced before issuing a one-out walk to Herrera in the third.

Stott, who hit his first major league homer on Friday and belted a walk-off, three-run shot to beat the Los Angeles Angels on Sunday, blasted his third home run in five days to give the Phillies a 2-0 lead.

Schwarber followed with a single and Hoskins then went deep into the Philadelphia bullpen in right-center field for a 4-0 lead.

Houser retired five straight after that, but Herrera led off the fifth with a home run to left to extend the lead to 5-0.

Stott and Schwarber had back-to-back doubles in the seventh to make it 6-0.

Schwarber had another RBI double in the ninth before Harper socked a three-run homer for a 10-0 lead.

In an attempt to spur the offense, the Brewers moved Christian Yelich up to the leadoff spot for the first time this season. The 2018 National League MVP and two-time NL batting champion went 1-for-4, leaving his average at .224.