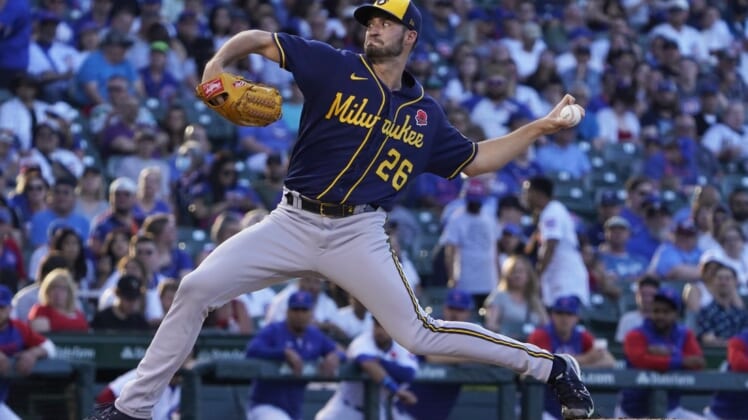 Aaron Ashby allowed one run and struck out a career-high 12 in six innings, while Victor Caratini and Tyrone Taylor each homered, as the visiting Milwaukee Brewers completed a doubleheader sweep of the Chicago Cubs with Monday night’s 3-1 victory.

Rowdy Tellez had the only other hit, an RBI double, for the NL Central-leading Brewers, who earned a 7-6 victory in Game 1, and have won three straight. Ashby (1-3) allowed two hits, two walks and only Willson Contreras’ homer through six. But, three consecutive Chicago singles — two on the infield — to open the seventh loaded the bases and ended the left-hander’s night.

However, Brad Boxberger fanned Nico Hoerner and got Andrelton Simmons to bounce into an inning-ending 5-2-3 double play, preserving Ashby’s first win of 2022. His 12 strikeouts are the most versus Chicago since teammate Corbin Burnes fanned 15 on Aug. 11, 2021.

Teammate Josh Hader extended his scoreless stretch to 39 games — dating to July 28, 2021 — by recording a perfect ninth for his 18th save of the season — and second of the day.

Chicago starter Drew Smyly allowed a walk and struck out three over three hitless innings, but didn’t come out for the fourth due to right oblique soreness. Anderson Espinoza (0-1) came on in his major league debut for the Cubs, and three batters into the fourth gave up Tellez’s run-scoring hit into the right-field corner.

However, Contreras (two hits) tied the game at 1 in the bottom of the fourth with a blast over the left-field bleachers for Chicago’s first hit. But, the Brewers went ahead 2-1 when ex-Cub Caratini took Espinoza just over the left-center-field basket in the fifth.

Despite yielding those two runs on the two hits, walking three and hitting two batters, Espinoza struck out six over four innings for the Cubs, who’ve dropped three straight and five of six while being swept in a doubleheader for the second time this month. Chicago has also lost six of seven at home, where it’s a dismal 7-17.

Taylor’s second homer of the day led off the eighth.