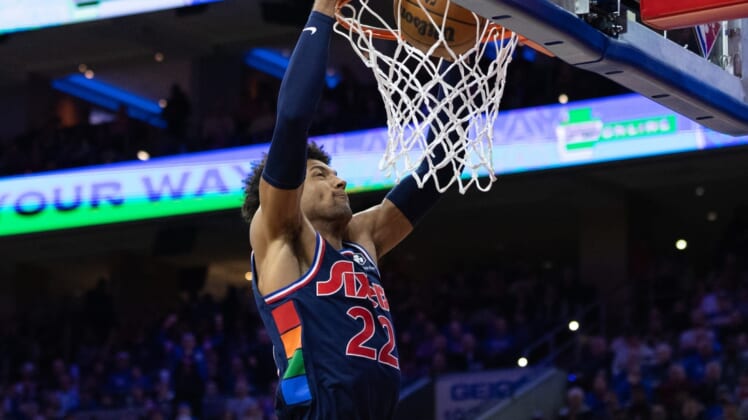 The Philadelphia 76ers lost a pivotal game on Tuesday.

The good news is that they’ll play the lottery-bound Pistons twice in their last seven games of the regular season, including a visit to Detroit on Thursday.

Philadelphia’s 118-116 loss to the Milwaukee Bucks dropped it to fourth place in the Eastern Conference standings. The Sixers (46-29), however, remain within striking distance of the Miami Heat, Bucks and Boston Celtics.

Philadelphia followed up a 114-104 setback to the Phoenix Suns on Sunday by getting outscored by 10 points in the fourth quarter on Tuesday. Giannis Antetokounmpo led Milwaukee with 40 points and also blocked a Joel Embiid shot in the closing seconds.

“We didn’t do what we had to do and they made their run,” Embiid said. “They cut the lead and they gained some momentum, and it carried over.”

If there was a silver lining, it was the offensive output from James Harden. The star guard scored 32 points, his highest total since being acquired from Brooklyn last month. He added nine assists and five rebounds.

“I think he’s pretty comfortable,” fellow guard Danny Green said. “He’s still learning a lot of the things that we do defensively. The philosophies, offensively, of where to find a spot and also (Embiid’s) spots in playing with him, and also playing with different lineups, different rotations.”

Harden met with coach Doc Rivers prior to the game, searching for ways to make a bigger impact.

“I’m trying to get it right,” Harden said. “I’m trying to be the best James Harden that I can be. … He basically just told me, to sum it up, to ‘Just go out there and be you.’ That was kind of my mindset (Tuesday). So it felt good.”

The Sixers recorded two wins over the Pistons during their first nine games of the season. They haven’t seen each other since Nov. 4.

They’ll now square off twice as the season winds down, with the fourth meeting in the regular season finale on April 10.

Detroit (20-56) has gone 2-9 over its last 11 games and will be looking to snap a three-game losing streak. The Pistons gave Brooklyn a tough battle on Tuesday before dropping a 130-123 decision.

Rookie of the Year candidate Cade Cunningham scored 29 of his 34 points in the second half. Cunningham sustained a bruised tailbone in the first half.

“He was hurt. He played hurt and he’s all iced up in there now,” coach Dwane Casey said. “He can come out and get 34 a lot of nights if he asserts himself, but he did it while he was injured. That was admirable on his part. For a rookie to come in with his tailbone hurting and still put up the numbers and play through it says a lot about him.”

What the Pistons couldn’t overcome was a combined 65 points from Nets stars Kevin Durant and Kyrie Irving.

“They kept their stars in for almost 40 minutes to beat us. That’s respect,” Casey said. “That’s how we’re going to jump start into next year with this type of play. The things we made mistakes on, we’ll learn from – and we have learned from. That’s what gives me optimism. We’re not getting rewarded with the wins, but the good play and effort is there.”