5 Raiders takeaways in win over Steelers 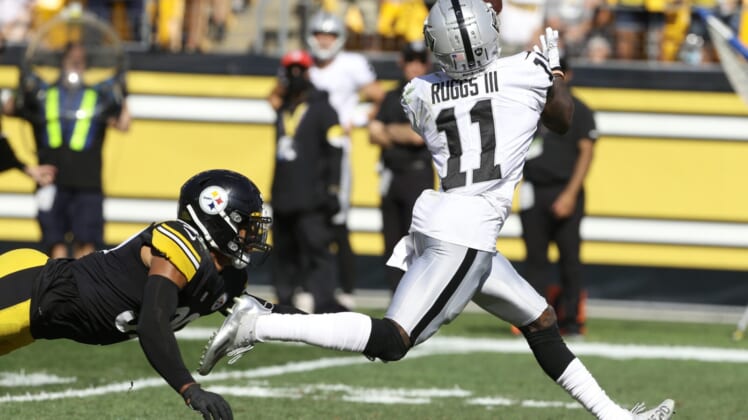 For the first time since 1984, the Las Vegas Raiders have started consecutive seasons 2-0 after their 26-17 win over the Pittsburgh Steelers on Sunday. The Raiders defense led the effort again and Derek Carr had another massive day in the win. Having a long list of injuries, and traveling to the Eastern time zone on a short week, the Raiders impressed and won again. Here’s 5 Raiders takeaways from the big road win on Sunday.

One of the Raiders takeaways from this game was the continued dominace of the Raiders defense. The unit continues to yield yards and points, but is already very stingy. Through three quarters, Gus Bradley’s band of brothers yielded just seven points to Ben Roethlisberger and the Steelers. On the day, the unit gave up over 300 yards in total offense but made key stops when they had to – including in the fourth quarter. Solomon Thomas notched two sacks on the day and Maxx Crosby continued to give the Steelers offensive line fits and nearly recorded a few sacks himself. Casey Hayaward Jr., who left the game twice with a cramp, also played a huge factor as did rookie Nate Hobbs. Safeties Johnathan Abram and Dallin Leavitt had forgetable moments, but both made key plays including Leavitt’s late hit on Chase Claypool on a fourth down for the Steelers. This unit is getting production throughout the lineup. They again allowed the offense to get off to a bit of an uneven start and still rally.

What can you say about Derek Carr through the first two weeks of 2021? One of the key Raiders takeaways from the firs two week of the season is Carr is playing unworldly and looks masterful running Gruden’s offense. Through the first two week, Carr has passed for 817 yards – the most over a two-game stretch to start the season in Raiders history. On Sunday, Carr and the Raiders offense struggled in the first half only to rally massively in the second half —just as they did versus Baltimore. Carr finished the game 28-of-37 for 382 yards and two touchdowns. “You’re missing a superstar in Jacobs, the O-line is banged up…we knew we were going to have to throw it,” Carr said after the game. Carr has elevated the play of his team on the field and has rallied them at game-winning moments and is showing a level of confidence and trust in multiple receivers we’ve not seen in years. Carr connected with nine differen receivers in the win.

With Carr distributing the ball well, the Raiders young wide receivers were able to showout again and at key times in the game. This was one of the Raiders takeaways from last week’s win too. Both Henry Ruggs III and Bryan Edwards factored in key drives for the Raiders offense. Ruggs got to show his world-class speed on a 61-yard touchdown pass from Carr with 9:35 remaining in the game. “It was a moonball,” Ruggs III said of the bomb from Carr. “He threw it up and I just had to go get it.” Ruggs finished the day with five catches for 113 yards and the TD. Edwards also made a huge contribution with three catches for 40 yards and had a touchdown that was called back due to holding on the offensive line. Hunter Renfrow had five catches for 57 yards and Darren Waller had five for 65 yards. Add in Kenyan Drake with five for 46 yards, and TE Foster Moreau with a big touchdown, the Raiders are showing they can stretch a defense so many ways. This Raiders takeaway is significant as the future of Josh Jacobs and his injury are unknown. The Raiders strugged in the run game but made up for it with a short passing game.

The magician that is the Raiders offensive line coach Tom Cable continues to do magic up front. The Raiders sufferered another loss as first-round draft pick, and right tackle, Alex Leatherwood was lost due to injury. Brandon Parker came in and did a good job in his place. Still, the “revolving door” at OL hurt the team in key offensive situations earlier. Including a series where the Raiders had a first and goal from the 2-yard line. They were then backed up by an uncharcateristc Kolton Miller holding call, followed by a Leatherwood hold (which was very ticky-tack and negated the Edwards touchdwon), and at other times in the first half. But, they have held up well, for the most part, protecting Derek Carr and rising to the occasion. The line protected Carr on the key drive which resulted in the Ruggs touchdown, and then to seal the game late on the ground. The group is battered and inconsistent at times, but has shown a knack to play well enough to help Carr win games.

After not seeing significant snaps in the Raiders win last Monday against the Ravens, cornerback Damon Arnette was called into action when both Hayward and Trayvon Mullen missed time with cramps. Arnette made one nice pass defense but on a long pass to Chase Claypool, Arnette played it badly but made matters worse when he didn’t touch him on the ground allowing the Steeler to gain five more yards on the play. Arnette continues to struggle with focus and it’s an issue you hope he turns around, but clearly the lack of early playing time hasn’t sent the message Bradley probably intended.