5 NFL teams that failed the offseason 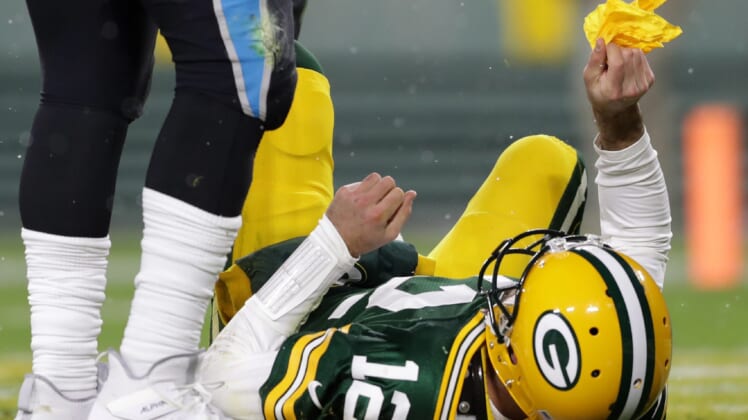 The offseason is viewed as a time of hope for every NFL team and fan base. No matter what happened during the regular season, the NFL Draft and free agency offer excitement and the potential to make huge moves.

For many fans, the 2020 offseason saw their team make huge moves that have everyone feeling excited for the upcoming season. While plenty of teams did very well, making moves that will put them in the playoff hunt or even in Super Bowl contention, others fell flat on their face this offseason.

Whether the organization struck out on top talent in free agency or made a series of baffling moves that hurt the team, the impact will likely have the same result. Presented with a chance to make their teams significantly better, multiple organizations came up well short of that in the NFL Draft and free agency.

Here are the five NFL teams that failed this offseason.

The offseason started nicely for the Packers. Adding linebacker Christian Kirksey and offensive tackle Rick Wagner gave the team two potential starters in areas of need. It seemed like the start of an offseason that could lift this team past its NFC Championship Game hurdle. Everything unraveled after those early moves.

Green Bay didn’t sign a starting-caliber wide receiver, it didn’t find another starting inside linebacker nor strengthen its secondary. As a result, everyone expected general manager Brian Gutekunst to address those spots in the NFL Draft. Instead, he reached for quarterback Jordan Love in the first round, took a No. 3 running back in the second round and selected a fullback in Round 3. Aaron Rodgers will now be involved in trade rumors until he is eventually moved and this team lost ground in the NFC. Playing for the future during a win-now window is a bold decision and we’ll see the results this season.

It would be an understatement to call this an odd offseason. Despite reports that head coach Adam Gase lost the locker room, the Jets stuck by him this offseason and are happy to let him get another shot behind the controls. It’s baffling that a coach with 20 wins over the past three seasons would keep being trusted, but it makes more sense given this team’s other moves.

The Jets entered the offseason with a hangar full of cash to spend on upgrading the offensive line and receiving corps. Despite plenty of great talent being available, New York divided up its cash on receiver Breshad Perriman, center Connor McGovern, guard Greg Van Roten and tackle George Fant. Perriman is a discount version of Robby Anderson and the three offensive linemen are average in their best moments. While the Jets did well in the draft, we can’t look past the baffling decisions made with Gase and in free agency.

When the Texans heard fans and analysts suggest Bill O’Brien should be fired following an ugly collapse in the playoffs, they went in a mystifying direction. Houston made O’Brien its general manager, giving him the official title ever after he massively overpaid for Laremy Tunsil in a trade before the 2019 season.

He proved why many in the NFL question nearly every decision he makes. O’Brien practically gave away All-Pro receiver DeAndre Hopkins because they didn’t get along. After trading the team’s top receiver, O’Brien overpaid in another trade, this time for Brandin Cooks. If that wasn’t enough, he cost the team millions by giving Tunsil all the leverage in contract negotiations. Houston has one glaring problem and his name is Bill O’Brien.

When the general manager admits he was prepared to be fired, that’s usually a sign the time is right for him to go. Instead, the Giants stuck with Dave Gettleman after a disastrous 2019 season. By keeping him in charge, New York allowed him to continue his penchant for wild decisions.

New York needed to find help at inside linebacker, but Gettleman treated the position like its the 1990s. The Giants overpaid for Blake Martinez, bringing in an unathletic linebacker who is exposed in coverage and racks up tackles after the running back gains five yards. Gettleman also didn’t address wide receiver, a spot where New York needs more help for Daniel Jones. The team is on notice and we can only hope Joe Judge surprises everyone and becomes a good coach.

When an entire offseason hinges on one player, there are only two possible outcomes. The moment the Patriots learned Tom Brady was leaving, it instantly made this offseason a failure. If there was any lingering doubt about that, New England’s other moves just solidified the direction this organization is headed.

The Patriots kept guard Joe Thuney with the franchise tag, but the All-Pro guard holds all the leverage in contract negotiations. New England explored moving him during the draft, but couldn’t find the compensation it wanted. He’ll likely walk in free agency next offseason and the Patriots’ draft-pick compensation might be limited if they spend on other spots. New England also didn’t come out of the NFL Draft with an impressive haul, increasing doubts about this team’s talent on offense. It’s difficult to see this being a good team in 2020, even with Bill Belichick at the helm.