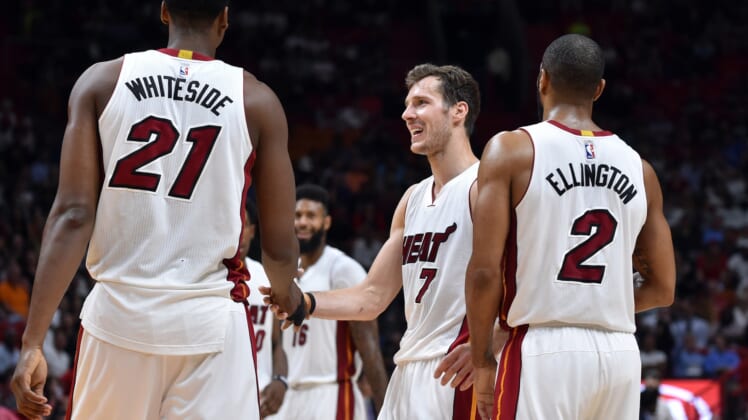 A total of 22 of the NBA’s 30 teams will resume their season at Walt Disney World in Orlando late next month. It will come after a four-plus month hiatus stemming from the ongoing COVID-19 pandemic.

Obviously, title contenders have a ton of prove as the season resumes. As of right now, the Los Angeles Lakers and Milwaukee Bucks are favorites to meet in the NBA Finals.

Even then, there’s a lot on the line for individual players. That includes these five impending free agents.

Whiteside’s tenure with the Miami Heat ended on a sour note following the 2018-19 season. He was sent to the Pacific Northwest as Miami pretty much engaged in nothing less than a salary dump to rid itself of the 30-year-old big man.

The former All Defensive Team performer has played well in Portland this season. He’s averaging 16.3 points and 14.2 rebounds while seeing a robust 31.3 minutes of action per game. Set to become a free agent. Whiteside could be in for one final pay day before he hits the back end of his prime. How he performs will tell us a lot moving forward.

Whiteside’s former teammate with the Heat, this former All-Star is not necessarily playing for a long-term deal. Dragic just turned 34 and is no longer in his prime. Even then, he could still cash out on a short-term deal once the 2019-20 NBA season finally concludes in October.

Dragic has taken to the sixth man role pretty well this season. He’s averaging 16.1 points and 5.1 rebounds while shooting 38% from distance. Now that Miami has its point guard of the future in that of rookie Kendrick Nunn, it’s highly unlikely Dragic returns to South Beach. A strong performance from the veteran once the season resumes could set into motion other contending teams chasing him on a pricey short-term deal.

Ibaka has been in and out of Nick Nurse’s dog house throughout the 2019-20 season. We’ve seen the championship head coach sit the power forward at key times throughout the campaign. Statistically, the 30-year-old Ibaka has put up good numbers. He’s averaging 16.0 points and 8.3 rebounds on 52% shooting from the field.

That doesn’t tell the entire story. Ibaka has struggled maintaining a high level of play on defense and continues to remain inconsistent. The hope here is that a four-month lay off will help him return to form en route to aiding in the Raptors’ repeat aspirations. If not, he’s likely looking at nothing more than a mid-level exception in free agency.

It was somewhat shocking to see Kings general manager Vlade Divac push back against moving Bogdanovic ahead of February’s trade deadline. He’s an impending free agent and doesn’t necessarily have a long-term future in California’s capital city.

With the Kings as long shots to earn a playoff appearance under the NBA’s new format, the 27-year-old Bogdanovic might only have eight more games remaining to prove his worth ahead of free agency. For his career, the Serbia native is averaging 14.5 points on 37% shooting from beyond the three-point line. If he shows out, a lucrative contract could be in order during free agency.

Acquired from the Los Angeles Clippers as a salary throw-in in the George Paul trade, Gallinari continues to prove that he’s more than a role player. The veteran forward has been one of the primary reasons a surprising Thunder team will be playing playoff basketball.

Gallinari, 31, is averaging 19.2 points and 5.5 rebounds on 44% shooting from the field. That includes a resounding 41% from distance. The stretch four could have an extremely strong free-agent market should he show out in Orlando starting late next month.