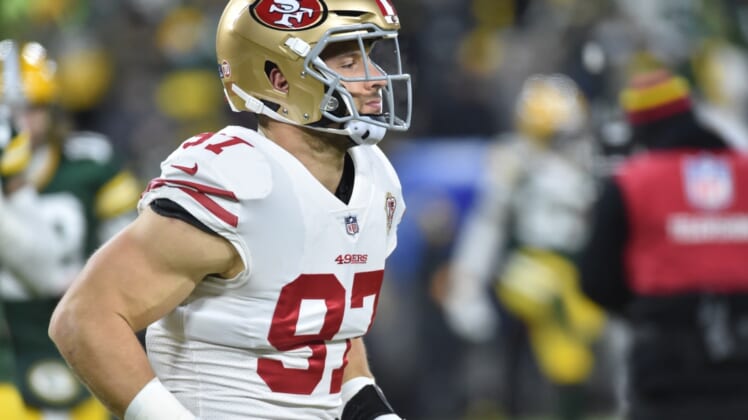 “We’re going to do everything we can to keep him a part of this organization,” Niners general manager John Lynch said Monday during a draft week press conference. “He’s a foundational player, much like Deebo (Samuel).”

Samuel asked the 49ers last week for a trade and reportedly has no plans to report for offseason workouts.

Samuel is frustrated how the team is using him. A versatile piece of the 49ers’ offense, Samuel lines up at running back and in the slot. He posted 1,770 scrimmage yards and 14 total touchdowns in 2021.

“I can’t ever imagine wanting to move on from Deebo. … He’s just too good of a player,” Lynch said, without going into specifics.

Lynch also said quarterback Jimmy Garoppolo will resume throwing in June. Garoppolo is rehabbing from shoulder surgery and is not expected to be at full strength until training camp begins in July.

The 49ers selected Lance with the No. 3 overall pick in the 2021 NFL Draft. He appeared in six games (two starts) and completed 57.7 percent of his pass attempts for 603 yards with five touchdowns and two interceptions. He was 1-1 as a starter.

Lynch has previously said they would not release Garoppolo but might trade or even keep him.

“You don’t just give players like that away,” Lynch said Monday.