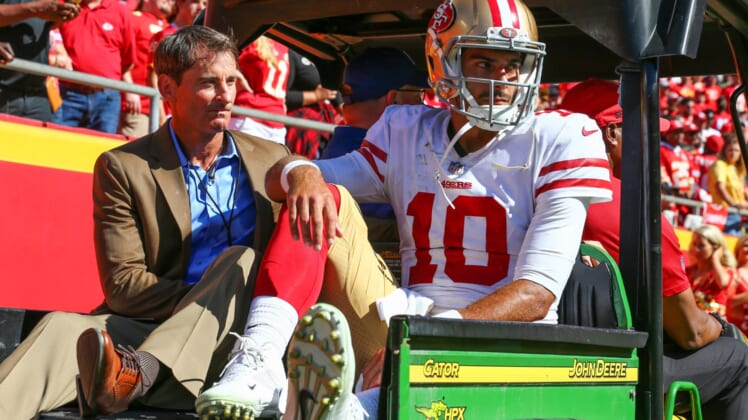 The San Francisco 49ers keep getting positive news regarding quarterback Jimmy Garoppolo, who expects to be a full participant in training camp.

Of course, Garoppolo tore his ACL in the third game last season and was lost for the year.

For months, the team has said that Garoppolo should be ready to participate in OTAs.

The quarterback has now chimed in and says he hopes to be available for 7-on-7 work, and that he should be fully cleared for training camp, per SF Gate.

Garoppolo admitted it took some time to trust his surgically repaired knee but that things have turned around and he’s starting to see more positive developments daily.

“It’s encouraging,” he said. “Every day gets easier and easier. Able to make this throw better than I was a week ago. It’s small victories like that. Throughout the whole process, it’s all about small victories because you’re not going to jump out and be able to throw it 60, 70 yards again. Small victories.”

San Francisco is facing a key campaign and needs Garoppolo to not only return healthy but play at a high level as well.

It’s the third year for general manager John Lynch, and head coach Kyle Shanahan, who needs to get results. The team has invested heavily in free agents the past couple of years, along with trading for Garoppolo. Now is the time for all those efforts to pay off.