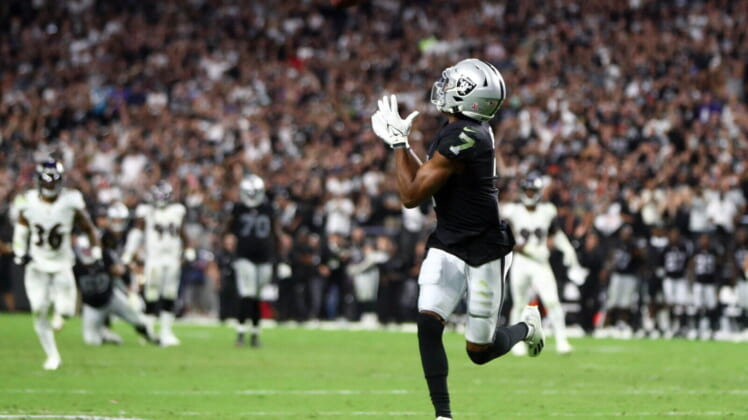 There hasn’t been a bigger night in Raider Nation in decades. A new stadium, fans in the stands for the first time ever, and a big Las Vegas Raiders overtime win over the Baltimore Ravens 33-27 on what was a spectacular night in Sin City. It was a rollercoaster of emotions for the Silver and Black faithful who endured a rough start to see their team win one of the more memorable Monday Night Football matchups in recent memory. But what Raiders takeaways should we ponder as they get set to travel to Pittsburgh in Week 2?

Here are 5 Raiders takeaways the day after the thrilling win at Allegiant Stadium:

Raiders Takeaways No. 1: Derek Carr balled out after rough start

Monday night’s game was a good example of why Derek Carr tends to be a polarizing figure in Raider Nation. Struggling to find a rhythm and perhaps targeting Darren Waller too much, Carr hit a period of the first half where he had missed on eight straight pass attempts and saw his team down 14-0. He not only recovered to finish the game 34-of-56 for 435 yards and two touchdowns, but Carr led a masterful drive with just 35 seconds left in regulation (with no timeouts) to set up the game-tying Daniel Carlson 55-yard field goal to send the game into overtime. He then topped himself by going finding Bryan Edwards on the team’s first drive in overtime deep setting up what should have been a game-winning touchdown from the one. But, in typical Raiders fashion, they don’t do anything easily. After failing to convert and throwing an interception (not his fault as a catchable ball bounced off the hands of WR Willie Snead), Carr capitalized on a Lamar Jackson and, for the third time in the 4th quarter and in overtime, Carr led his team into scoring position this time finding Zay Jones for the winning touchdown. Carr haters might not like it, but he had a masterful performance.

The joke that was the Las Vegas Raiders defense is no longer. In its place is a more competent unit who forced one of the leagues best players to fumble twice — including the fumble that led to the overtime win. Gus Bradley’s debut as the Raiders defensive coordinator wasn’t without its forgetable moments (see Ravens Cover-3 breaker), but there’s no question this defense is lightyears better than it’s been over the past two seasons. Before suffering a hamstring injury, new EDGE addition Yannick Ngakoue played his heart out bringing pressure from the outside most of the night. WhileNgakoue didn’t record a sack, it’s going to come for the big addition on the outside. On the other side, Maxx Crosby was lights out and shows why he has one of the best motor’s in the NFL. More on him below. The Raiders rebuilt linebacking corps also struggled at times but the additions of Denzel Perryman and KJ Wright paid for themselves at key moments in the win. Overall, the defensive backs played well including veteran addition Casey Heyward Jr. While no one will be talking about this unit being a Top 10 defense just yet, a key Raiders takeaways from Week 1 is the team has a competent and confident defense that played almost 70 minutes without breaking.

Raiders Takeaways No. 3: Bryan Edwards put the league on notice

Sure, Bryan Edwards wasn’t even targeted early in the game against the Ravens but he was when the game was on the line and delivered massively. When the Raiders got the ball back trailing by three points with just 35 seconds remaining in regulation, Edwards was Carr’s favorite target helping the team get into game-tying field goal range. But it was his spectacular adjustment and 32-yard reception (initially called a touchdown before replay found him to be down at the one-yard line) in overtime which had America take notice of the promising young wideout. Edwards finished the night with four receptions for 81 yards. Like Henry Ruggs III (2 rec, 46 yards) and Hunter Renfrow (6 rec, 70 yards), the Raiders most spread the ball around — including to Edwards.

Raiders Takeaways No. 4: Maxx Crosby is a monster and a superstar in the making

The time is now for Maxx Crosby. Crediting his sobriety and focus on hard work during the offseason, Crosby was one of the key Raiders takeaways in this game and the national audience was exposed to a truly special player on this team. Crosby owned Ravens veteran offesnive lineman Alejandro Villanueva the entire night and was consistently pressuring Lamar Jackson. “Maxx, he did a great job. I know he wanted to get a sack on me because me and him have mutual friends,” Jackson said after the game. “They told me about it. I can’t let him get me, but he finally got me. He did a great job. Yannick [Ngakoue] did a great job as well.” Crosby finished the game with two sacks and 6 tackles. If Ngakoue can overcome his early injury, the duo could be dangerous for this Raiders team.