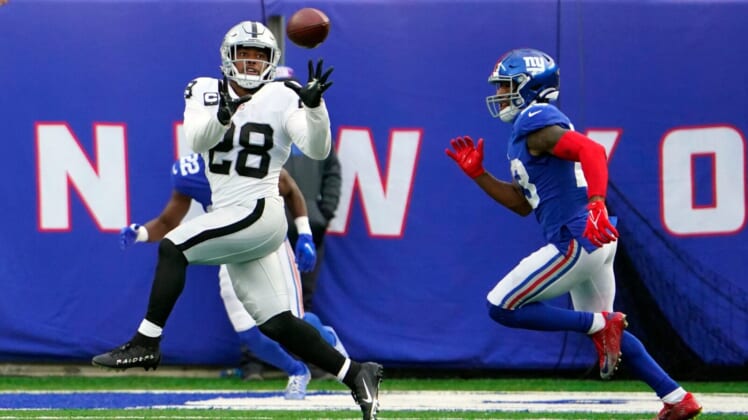 There are big games and then there are really big games. When the Las Vegas Raiders host the Kansas City Chiefs on Sunday Night Football (5:20 p.m PT on NBC) later tonight, playoff implications are in play and also the overall direction of these two teams in what has been a challenging season for both — for very different reasons.

This rivalry is storied and full of historic moments. The 122nd meeting between these old AFL rivals is just the second time they’ve met at Allegiant Stadium in Las Vegas. The Raiders and Chiefs split the series last year, with each team winning on the other’s home field.

Here are the 4 keys to a Raiders victory tonight against Kansas City.

One of the keys to last week’s 23-16 loss against the New York Giants was settling for three points rather than finishing drives for seven points.

Against the Chiefs on Sunday night, the Raiders offense is going up a Kansas City defense that gives up 227 points, which ranks 26th in the NFL.

Interim head coach Rich Bisaccia said he hopes the offense can improve from a week ago to finish possessions in the end zone.

“We moved the ball up and down a bunch,” Bisaccia said. “We got ourselves in field position that we think was advantageous to us and we’ll hopefully play a little bit better this week.”

The Kansas City defense is led by defensive end Chris Jones and strong safety Tyrann Mathieu, with the latter having the ability to give false looks to opposing offenses.

The Chiefs are tied for 12th with six other NFL teams with seven interceptions.

Whenever teams face the Chiefs, they know that they have to try and contain quarterback Patrick Mahomes. Last week against the Green Bay Packers inside Arrowhead Stadium, the two-time Associated Press MVP completed 20-of-37 passes for a season-low 166 yards and a touchdown in a 13-7 victory for Kansas City.

The key to containing Mahomes is to be ready for everything, ranging from sidearm throws from his hip to fancy plays called by either the 26-year-old quarterback or head coach Andy Reid.

Raiders’ defensive tackle Quinton Jefferson said this game is for all of the offseason training for a quarterback that is going to run east and west as much as he will run north to south on the gridiron.

“As a defensive lineman, this is one of the games that all that conditioning comes in effect because he’s running around everywhere, he’s dropping deep in the pocket and we got to go hustle and go hunting, literally,” Jefferson said. “Run him down, don’t let him set his feet. You know he’s going to make plays. You’ve got to know that but limit those plays and play like our hair is on fire.”

Not only do you have to contain Mahomes, but also his top two targets in wide receiver Tyreek Hill and tight end Travis Kelce.

Among pass-catchers, Hill ranks second with 68 receptions, fifth with 772 yards and second in receiving first downs. Hill also ranks second in the NFL with 101 targets.

Kelce leads tight ends in targets, receptions, receiving yards and is tied for first with three other tight ends with five touchdowns.

Giving up the football via giveaways has affected both quarterbacks negatively throughout the season.

In last week’s loss to New York, Carr lost a fumble and threw two interceptions, including one returned for a pick-six.

Through nine games this season, Mahomes has thrown 10 interceptions, including at least one in every game from Week Two to Week Eight.

Between the 2019 and 2020 seasons, Mahomes had only thrown 11 interceptions across 29 regular-season games. The most interceptions the Tyler, Texas native has thrown in a season is 12, the same year he was named AP Offensive Player of the Year, en route to his first Super Bowl win.

Whoever wins the turnover margin will be in a favorable position to win the game.

4. Raiders control their own destiny

Las Vegas is currently 5-3 and the other three AFC West teams also have five victories entering this week.

The Los Angeles Chargers have three losses with the Raiders, while the Chiefs and Denver Broncos have four losses.

Looking at the playoff picture, with the Chargers currently holding the head-to-head tiebreaker over the Raiders, the Bolts are at the No. 3 seed in the AFC playoffs and the Raiders are at No. 5.

With a new playoff format of seven teams from each conference making the playoffs, along with the best team from the AFC and NFC receiving a first-round bye, Kansas City is the first team out at No. 8 and the Broncos are at No. 11, based on tiebreakers.

Bisaccia said clinching the division crown gives you the easiest opportunity to get into the playoff tournament while also having home-field advantage for at least the wild card round.

“The best chance to get into the playoffs is to win your division,” Bisaccia said. “We’re back at home and it’s the Kansas City Chiefs. You know the historic rivalry. We’re all very aware of that but it’s a game for us that we’re coming off of a game that we lost, so we’re excited about having the opportunity to play football again.”