About halfway through the 2014 season, there are certain trends we can take seriously heading into the summer months. A certain last place team in the American League East may be playing better ball recently, but it is definitely under the eight ball. Meanwhile, a team out west finds itself struggling to get to .500 after a ton of veteran additions during the winter. 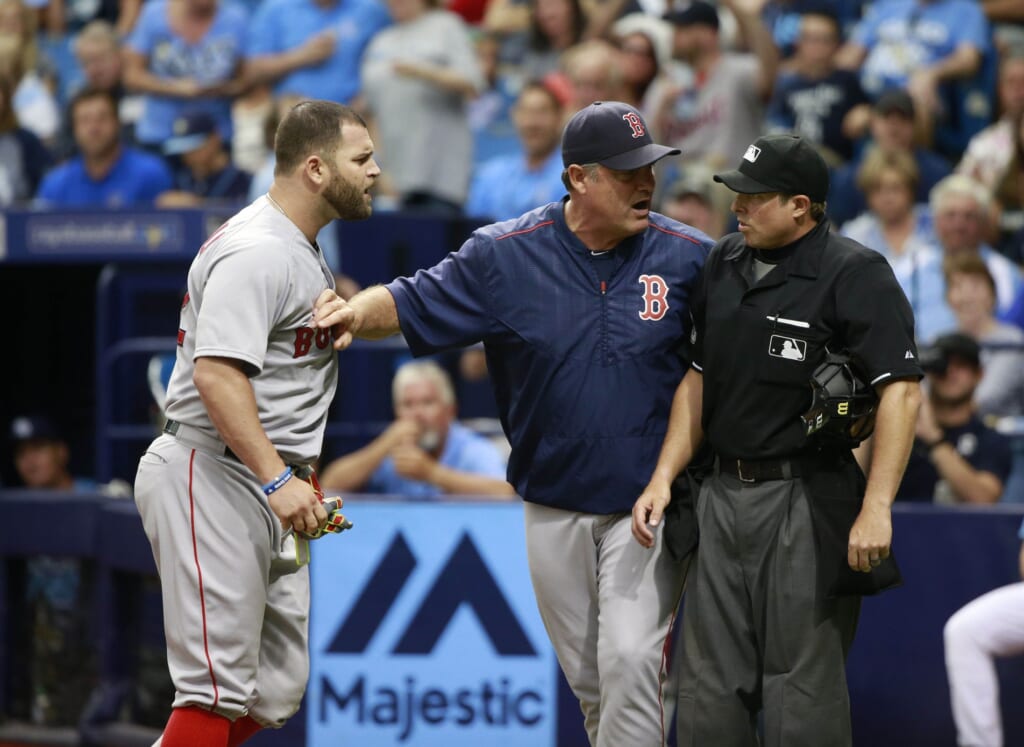 Courtesy of USA Today Sports: 2015 has been a season of frustration for the Red Sox.

The good news here for Boston is that no one is pulling away in the American League East. That’s pretty much the only good news for this fledgling team. Six games under .500 heading into Monday’s action, the Red Sox are stuck between an unrealistic belief it can contend down the stretch and a more realistic scenario of 2015 being a lost season.

In fact, general manager Ben Cherington just recently had this to say about the potential that Boston may actually be sellers when the trade season comes calling (via CBS Sports):

“It’s time to think about it … It hasn’t worked out the way we hoped or expected it would.”

When a top executive for one of the most successful teams in recent baseball history starts talking about blowing it up, you pay attention. And while the team has won seven of 10, the entirety of the first half was a disaster.

Two of the team’s new starting pitchers have struggled a great deal. Both Justin Masterson and Rick Porcello boast ERA’s in the mid five’s. Meanwhile, Clay Buchholz’s 7-6 record doesn’t necessarily put him in top-end ace territory. And while Boston’s bullpen has performed well (all five mainstays with an ERA under four), the rotation needs to be more consistent in order for John Farrell and company to turn it around.

Offensively, it’s been a major struggle for the team’s top stars. David Ortiz (.228), Mike Napoli (.192) and Pablo Sandoval (.274) are all hitting below their career marks. The one saving grace here is Hanley Ramirez, who has 18 homers and 43 RBI’s at the halfway mark. Unless these other players join Ramirez and Dustin Pedroia (.306 average) in performing at a high level with the bat, Boston will find itself under .500 when all is said and done. As it currently stands, the team is 39-45 and in last place.

After adding the Upton brothers, Wil Myers, Derek Norris, Matt Kemp, James Shields and Craig Kimbrel during the winter, the Padres had pretty high expectations. Failing to mesh on the diamond, manager Bud Black was shown the unemployment line last month. And now halfway through the season, San Diego sits at 39-45 and in fourth place in the National League West.

It’s not hard to pinpoint the issues here. San Diego ranks 27th in the Majors with a .240 team batting average. Though, the team is in the top half in runs scored.

Instead, it’s been about pitching. The Padres rank 10th in the National League with a 4.00 team ERA, including a No. 12 ranking in bullpen ERA. That’s tremendously surprising considering the addition of Kimbrel in a trade with the Atlanta Braves prior to the season.

In order for the Padres to turn around their current 39-45 mark, they are going to have show more domination on the bump. The talent is most definitely here. A lot of that is going to depend on how Ian Kennedy and Andrew Cashner perform behind Shields and Tyson Ross in the rotation. They are currently a combined 7-17 with an ERA well over four on the season. That simply can’t continue.

More than that, it’s time San Diego’s new additions at the plate step up. And that starts with Kemp, who is hitting just .241 with six homers. If he’s unable to revert back to previous form, the Padres will be in trouble moving forward.

While Chicago has picked it up recently by winning eight of its past 13, the hole this team dug itself initially might be too much to overcome. Now seven games under .500 and 10 games out of first, the White Sox may want to start trading away veteran assets. The issue with this is that the team is just months removed from acquiring veterans in hopes of overtaking the Detroit Tigers and Kansas City Royals in the American League Central. Like we have seen over the past several years, the White Sox seem to be in a constant state of mediocrity.

Chicago’s offense has been the biggest issue. It ranks second-to-last in the American League in homers and dead last in runs. The likes of new additions, Melky Cabrera and Adam LaRoche, have struggled big time. Cabrera is hitting .259 with just three homers and 30 RBI’s. Meanwhile, LaRoche finds himself at a .231 clip while striking out nearly 33 percent of the time he’s taken to the plate. That’s just not going to get it done.

With Chris Sale and Jeff Samardzija performing at pretty high levels atop the rotation, Chicago has a chance to turn this thing around. It’s just going to need Jose Quintana and John Danks—a combined 8-15 on the season—to improve off their first half performances. If that happens, Chicago might be able to find itself in contention. However, that seems highly unlikely right now. 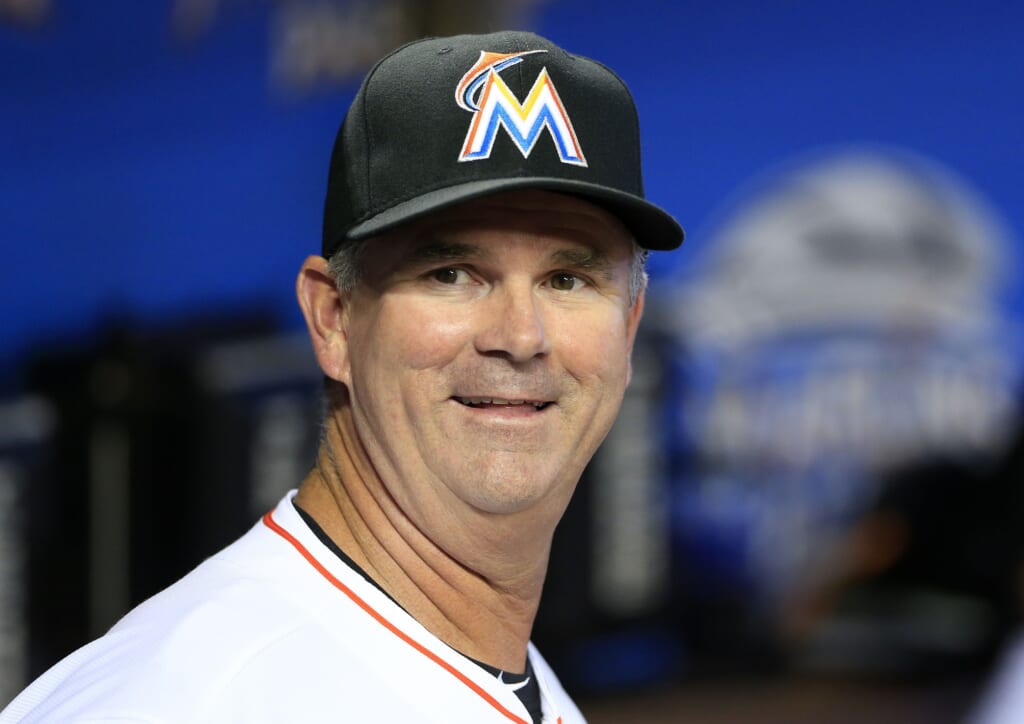 Courtesy of USA Today Sports: The Marlins GM is now their manager. That’s where they are right now.

When your general manager takes to the dugout to become your manager, there’s something wrong. That’s exactly what happened earlier this year when the Marlins fired Mike Redmond after a 16-22 start to the season. Since Redmond was replaced by GM Dan Jennings, the Marlins have posted a 19-26 record. Definitely not what the team had in mind after a winter full of veteran additions. Now 11 games out of first place and 10.5 games out of the second wild card spot, Miami is likely about to go into full-scale fire sale mode here.

Where did it go wrong?

Let’s start with the pitching. New additions Jarred Cosart, Dan Haren and Mat Latos have combined for a 10-15 record with a 4.34 ERA. These are decent numbers, but not something you would expect from three pitchers who have had more success in the past. It also doesn’t help that Cosart missed more than a month while sidelined due to an injury. As the team waits for the eventual return of Jose Fernandez, these three pitchers are going to have to step up big time.

Giancarlo Stanton (27 homers and 67 RBI’s through 83 games) may be on pace for a MVP-caliber season. Heck, Dee Gordon is hitting at a .339 clip. But those two are the only regulars producing at a high clip. Miami ranks 13th in the National League in runs scored, 11th in on-base percentage and have put up just 42 homers outside of the 27 Stanton has accumulated. Simply put, he needs more protection in the lineup.

Unfortunately for the Marlins, their 2015 season is pretty much over. Short of the team dominating the National League in the second half, this year will end in utter disappointment for the fledgling franchise.