4 keys to Raiders victory in Denver 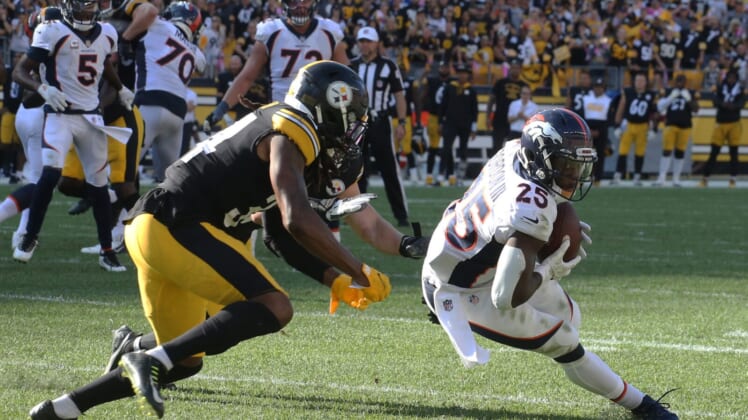 The Las Vegas Raiders get set to take on the Denver Broncos at Empower Field at Mile High on Oct. 17 at 1:25 p.m. and will be televised on CBS. Here are 4 keys to Raiders victory:

1. Reset and turn the page

Following Monday’s news surrounding Jon Gruden’s resignation, the Raiders enter Sunday’s game without their head coach for the first time since 2018. However, unlike other managerial vacancies during a season, the Raiders’ situation comes after five games and the team is only one game back of first place in the AFC West.

Defensive coordinator Gus Bradley said this moment can be a turning point with optimism ahead.

“You’re saddened for everyone, the organization, Coach (Gruden), for people involved, but yet the same time I think I was raised to always believe something good is about to happen,” Bradley said. “Sometimes that’s challenged on a week like this. Thankfully, we have a really good locker room and every player in that room – just like a lot of people in the world – have gone through adversity and they know how to handle it.

“Now, we’ve got a job to do, and we’re excited about the next opportunity. So, you battle that first emotion, then you move on and say ‘alright, something’s good about to happen. Let’s go see.”

One of those players that took a reset day on Wednesday was defensive end Carl Nassib, who is currently the only openly gay player in the NFL.

Bradley said the day off did not push him back in preparation for Sunday.

“He’s been a great teammate,” Bradley said of Nassib. “Things like this affect people differently and you understand that part of it, but (he is a) great communicator and it was great to have him back. Whenever he comes back, he provides a little juice for us, and he was great in the meetings. He’s all caught up and ready to go.”

Despite not having Gruden, the experience among the offensive coaches benefits the Raiders to not have as much radical alterations to the offensive scheme.

“It really hasn’t changed much at all, to be quite honest,” Olson said. “I’ve been in every meeting involving Derek Carr and the offensive game plan. We’ve got a veteran staff in Edgar Bennett, who really controls that wide receiver run group. We’ve got Tom Cable, who has controlled the offensive line group. And then, (senior offensive assistant John Morton) and myself have met with Derek, or the quarterbacks as a group, through every meeting.

“The communication part of it hasn’t changed at all other than the voice that they’re hearing the plan from.”

This is not the first time Olson has called plays for Carr. In his rookie season in 2014, Olson gave every play to Carr that season as he was part of the committee that scouted and drafted Carr.

Olson said their relationship is “strong” as the eighth-year quarterback prepares for his sixth game of the season and second AFC West opponent this year.

“Obviously, I was part of the organization that drafted him,” Olson said. “As I left here, I still remained in contact with Derek and had a lot of respect for the way his career has unfolded. A ton of respect now that I have the chance to be with him again. It’s a personal, as well as a business relationship and I think that is important.”

The Broncos defense is led by eight-time Pro Bowl linebacker Von Miller, who has already recorded 4.5 sacks through the first five games, which ranks 10th among NFL players.

Olson said players such as Darren Waller, Josh Jacobs and Hunter Renfrow will be key into changing things up against the Broncos.

“We feel like we have very strong skill positions – tight ends, running backs and the wide receivers – that we can mix and match and use different personnel groupings and keep them off balance that way,” Olson said.

The Broncos will be without receivers Jerry Jeudy and KJ Hamler; however, Denver does have Courtland Sutton and Tim Patrick as their top two pass catchers with tight end Noah Fant right behind.

Gordon’s lowest snap count percentage in a game this season is 49% in Week Four compared to Williams’ 41% snap count in Week Two.

Gordon, who played his first five seasons with the San Diego Chargers, was on the same team with Bradley, who was the Chargers’ defensive coordinator for the last four seasons, prior to 2021.

Bradley said he has noticed Gordon performing at a high level through the film.

“I think he’s playing his best football,” Bradley said. “I don’t know if he’s leaned up, but he looks faster, playing with a deal of confidence. Whether he’s fresher or what, but it shows up on tape. I’ve always been impressed with him working beside him. You feel him on the tape now.”

Last week, cornerbacks Travon Mullen and Damon Arnette were sidelined with injury. As a result, cornerback Amik Robertson stepped up and recorded his first NFL start. Robertson recorded an individual season-high six tackles, with four of those coming via solo tackles.

Bradley said Robertson continues to progress as he builds chemistry with his teammates and coaches.

“I think now that he’s playing more, you can start to feel that players know where he’s going to be, he’s building that confidence, that consistency,” Bradley said of Robertson. “So, everybody’s got to have trust with everybody on the unit and he’s building that.”