4 keys to a Raiders victory vs. Dolphins 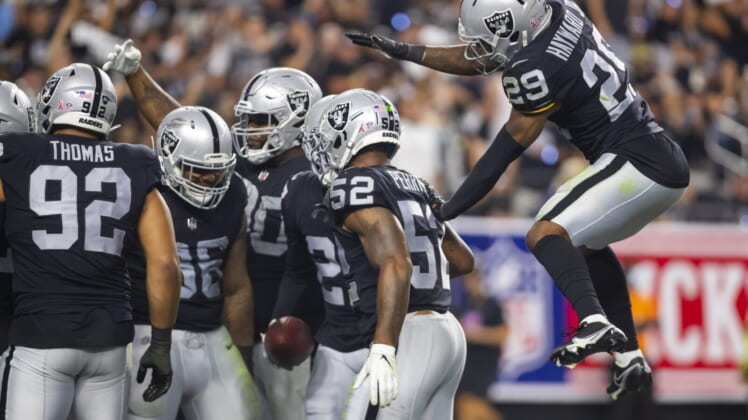 The Las Vegas Raiders host the Miami Dolphins at Allegiant Stadium tomorrow for a 1:05 p.m. kickoff. The Raiders are looking to win its first home game against Miami in 25 years when the Silver and Black defeated the Dolphins 17-7 at the Oakland-Alameda County Coliseum in 1996. Here are 4 keys to a Raiders victory and remain undefeated:

Two weeks ago, the Raiders played in front of their first sold out crowd at Allegiant Stadium to kick off the 2021 season on Monday Night Football. All 61,756 were treated to a thrilling game as the Raiders defeated the Baltimore Ravens 33-27 in overtime.

Following that game, players and coaches were talking about how the fans gave them the energy and belief to pull out the win.

“Excited to play at home, especially when you have a stadium like that and fans like we have,” Gruden said. “So, we expect a great atmosphere. We just want to deliver for them. That’s our number one goal. It’s not going to be easy. We need all the fans to help that we can get.”

The defense needs the energy to give them the extra motivation to make a stop on third down or a critical fourth-and-short play late in the ball game, especially when the Raiders are playing a team that will not have its starting quarterback in your home stadium.

On the injury report, lead running back Josh Jacobs is doubtful to play due to an ankle injury.

That means, the duo of Kenyan Drake and Peyton Barber will have to step up in his absence once again.

In addition, with Dolphins cornerbacks Xavien Howard and Byron Jones guarding some of pass catchers, such as wide receiver Henry Ruggs, the running backs have to step up.

Through Las Vegas’ first two games, the Raiders running backs have combined for 46 rushing attempts for only 134 yards. That totals up for only 2.9 yards per carry.

Gruden said the rushing attack has to improve, from both the running backs themselves, but also the blockers.

3. O-line needs to continue to improve

Although the offensive line is not as proven and has as much experience compared to units in previous years, the Raiders still need to provide the protection and open gaps for the running backs. Among the offensive line unit, one player who remains out is left guard Richie Incognito, who has been dealing with a calf strain since training camp.

As a result, John Simpson and Jermaine Eluemunor has replaced both Incognito and Denzelle Good, who tore his ACL during the Week One game against the Ravens.

Gruden said everyone, including the offensive line, such as Eluemunor and Simpson, has to improve as the season progresses.

4. Continue to distribute the ball

One of the keys behind quarterback Derek Carr’s success in 2021 is that he is not throwing the ball to just one pass catcher. He is finding different players at different moments in the game.

Carr, who leads the NFL in passing yards through two the season’s first two weeks, is at his best when he finds different guys on a drive. Sunday’s first touchdown drive is a perfect example.

In the third quarter against the Pittsburgh Steelers, he found Bryan Edwards for an 18-yard gain. Next, he threw it to Drake for nine yards. Two plays later, he found Hunter Renfrow followed by a long pass to Ruggs. and ended the drive on a touchdown pass to tight end Foster Moreau.

By throwing the ball to different receivers and tight ends, the defense will not know who will get the ball and what the next play will be between a run or pass, especially against a Miami defense, who was tied with three other teams with an NFL-leading 18 interceptions in 2020.

We know tight end Darren Waller will get his targets, but the more Carr utilizes his receivers, the more potent the offense will be.

The Dolphins and Raiders kickoff at 1:05 p.m. The game will be televised on CBS.