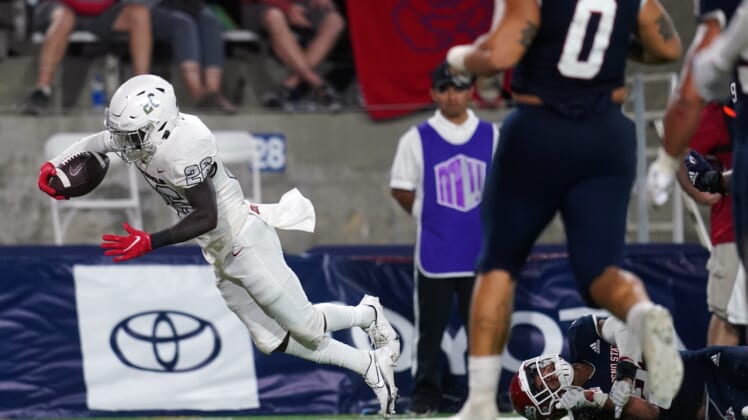 The UNLV Rebels’ comeback fell just short on Saturday evening against University of Texas-San Antonio at the infamous Alamodome, 24-17. The Rebels (0-5, 0-1 Mountain West) could not come up with a takeaway but had multiple opportunities as the Roadrunners (5-0, 1-0 Conference USA) took advantage of 3 UNLV turnovers.

A second missed field goal on back-to-back possessions by UTSA with 1:34 remaining kept the deficit to seven for the Rebels, who had the opportunity to tie the game on the ensuing drive.

But on the next possession, UTSA sacked freshman quarterback Cameron Friel on fourth-and-10 from the Roadrunners’ 36-yard line with 39 seconds remaining to seal the victory.

Friel was the primary play caller for the Rebels, who completed 25-of-37 passes for 307 yards, a touchdown and two interceptions. Friel’s 307 passing yards are the most in a game since Max Gilliam in 2018.

In the first half, UNLV was able to match UTSA’s scoring. After a 14-play, 92-yard drive, ending in a 9-yard touchdown for the Roadrunners, the Rebels came right back with a 63-yard touchdown pass from Friel to junior wide receiver Steve Jenkins.

The 6-foot, 175-pound receiver totaled five catches for 114 yards with the touchdown. The 114 yards is the most yards in a game for UNLV since last year’s finale against Hawaii.

During the Rebels following possession, they were helped by a UTSA unsportsmanlike conduct penalty that pushed them into the red zone. However, UNLV could not cash in for seven and settled to take a 10-7 lead, their first of the game.

The Roadrunners would go on to score 17 unanswered points, benefitted by a couple of interceptions and a fumble recovery.

Both interceptions led to touchdowns for UTSA.

Fortunately for the Rebels, the fumble led to a Roadrunners missed 33-yard field goal and kept the score at 24-10.

UNLV answered back by scoring a 9-yard touchdown pass from junior quarterback Justin Rodgers to sophomore wide receiver Zyell Griffin on fourth-and-1 to get within seven with 6:46 left.

UTSA remains undefeated at 5-0 and continues conference play next week against Western Kentucky.

Meanwhile, after a couple of close losses including two weeks ago at Fresno State against the then-No. 22 Bulldogs for the Mountain West Conference opener, the Rebels will have time to get some much-needed rest and get healthier with a bye this week. The Rebels have also lost to Iowa State, Arizona State and Eastern Washington.

The Rebels’ next game is at home against the Utah State Aggies on Oct. 16 at 4 p.m. on CBS Sports Network.